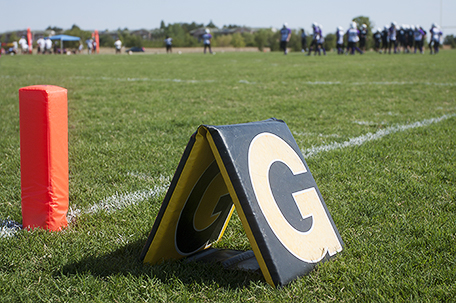 The Blackhawks Athletic Club helps young people realize their potential and learn what being a “winner” really means.

Sure, the Philadelphia Eagles and Philadelphia Soul have brought football glory to the City of Brotherly Love.

But not as much as the young men and women of the Blackhawk Athletic Club.

For the past 51 years, the Blackhawks Athletic Club has managed to build a tradition of success in Pop Warner Football while providing the boys and girls it works with the means to build a future for themselves.

About 400 young people participate in the program, which includes a 10-team football league and a cheerleading component that also competes for national championships. Students participating range from 8-to 14-years-old, said Don Richardson, director of the Blackhawk Athletic Club.

While athletics are a big part of what the Blackhawk Athletic Club does, that’s not all it does. The program also gives kids a safe haven that holds them accountable, Richardson said.

“We keep the kids occupied for a few hours to the point where they gotta go home, get something to eat, go to bed and get ready for school the next day,” he said. “They’re not out there doing anything wrong. … We’re scholastic athletes. We’re known nationally for our scholastics. We have straight A students that are recognized.”

More than a few kids from the Blackhawks Athletic Club who have gone to attend schools like St. Joseph’s Preparatory School for Boys and the Haverford School,  Richardson said.

But when it comes to football, the Athletic Club is among the best in the country for Pop Warner Football. This year, the club sent four teams to the ESPN Wide World of Sports Complex in Orlando, Florida to compete in the Pop Warner Super Bowl.

And as they have in years past, the kids from North Philadelphia who play their games on a field at 11th and Cecil B. Moore Avenue walked away with some championship hardware.

Two teams from the Blackhawks Athletic Club — The Division I Pee-Wee, which consists 11 and 12-year-olds and the 13 and under teams won the Pop Warner Super Bowl in their respective divisions.

The 11 and 12-year-old team defeated the Virginia Beach Mustangs 13-12, and the 13 and under team defeated the Maryland Titans 20-6. It’s the first time in nine years that the Blackhawks have won a Pop Warner Super Bowl.

Two other teams also made it to the Pop Warner Super Bowl — the 10-11 Pee Wee and the 8 and under but came up just short and finished in second.

Getting the young people to Orlando takes a lot of work. Parents and coaches do all they can to raise money for the trip. The organization has also received grants from the Alston Beech Foundation to help in their efforts.

“The kids, the coaches, and the parents really gave it their all,” Richardson said. “I’m just happy for the organization because of all the fundraising efforts by the parents to get the money by any means necessary. I’m glad that we’re able to give the kids the experience. Ninety percent of them have never flown on an airplane or been outside of Philadelphia.”

If you would like to help the Blackhawks Athletic Club with its mission to help young people achieve through football and cheerleading, visit: www.leaguelineup.com/welcome.asp?url=blackhawksathleticclub.