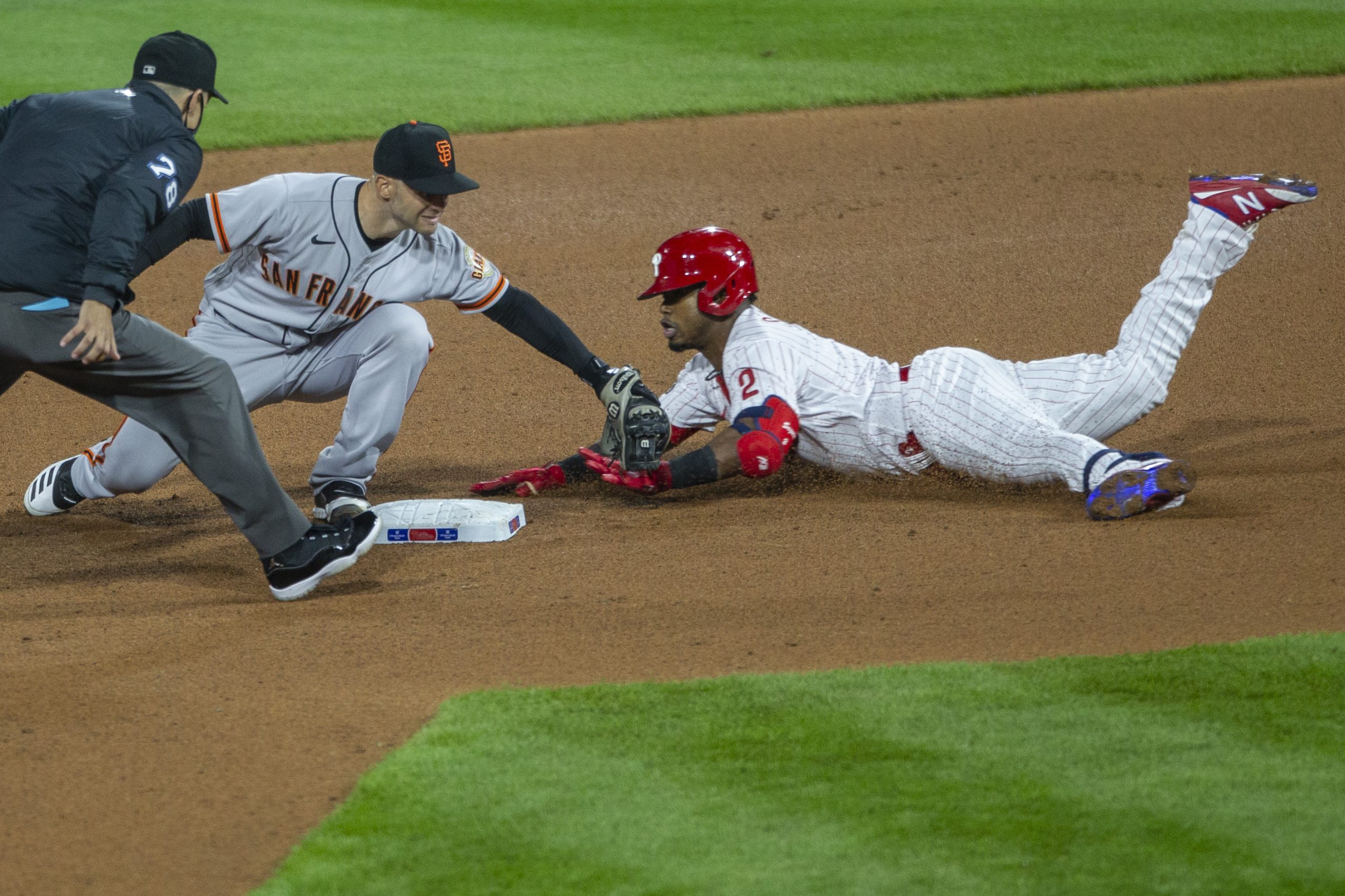 The Phillies lost the second game of their series with the San Francisco Giants due to a familiar problem: an unstable bullpen.

Above photo: Philadelphia Phillies’ Jean Segura, right, is safe at second on a double before San Francisco Giants’ second baseman Tommy La Stella, center, can make the tag during the fourth inning of a baseball game, Monday, April 19, 2021, in Philadelphia. (AP Photo/Laurence Kesterson)

Just when you thought it was safe at this point of the season to trust the Phillies improved bullpen to close out a close game, a reminder of last season’s inability to hold the lead in the late innings reappeared at Citizens Bank Park like a thief in the night Tuesday night.

With the Phillies hanging on to a 6-4 lead with one out in the top of the eighth inning, the San Francisco Giants exploded with six runs on a pair of three-run home runs and turned what looked like a sure win for the Phillies into a very bad 10-7 loss in front of 10,584 disappointed, socially distanced fans.

“There’s no one else to blame but ourselves,” Phillies manager Joe Girardi said after watching his team turn a winnable game into a loss. “We had a great chance to win, but we didn’t get it done.”

Between starter Zack Wheeler and reliever Connor Brogdon, the Phillies gave up five homeruns, four of them with men on base. After the game, Wheeler put the loss on him for keeping the Giants in the game.

“Tonight was on me,” Wheeler said after the game. “We had them down early and it’s my job to limit the damage. They carried the momentum they got off me for the rest of the game.”

In the fateful eighth inning, Brogdon, who hadn’t allowed a run since August 2020, gave up a three-home run to the right-center to Giants’ leftfielder Alex Dickerson to give San Francisco a 7-6 lead. Then Brogdon gave up a pair of singles to Posey and shortstop Brandon Crawford. Pinch-hitter Wilmer Flores added to Brogdon’s poor outing with another three-run homer.

During the postgame press conference with reporters, Brogdon said he couldn’t get his changeup going and that made it easier for Giants’ hitters to sit on his fastball.

“I didn’t have command of my changeup to left-handed hitters and I found myself in a lot of hitters’ counts with the fastball,” Brogdon said. “I thought I had a great feel for the changeup in the bullpen. I just couldn’t get it going on the mound.”

On a night when Wheeler didn’t have his best stuff, the Phillies offense bounced back from Monday’s awful hitting performance and seemingly scored enough runs to enable their starter to walk away from the game with the lead.

The Phillies jumped out to a 1-0 lead in the second inning on a double to left by shortstop Nick Maton that scored centerfielder Mickey Moniak, who reached on a single to left. Maton ended up on third after a throw to the plate.

The Phils jumped out to a 4-0 lead on a three-run homer to the right-field seats by second baseman Brad Miller.

The Giants finally got on the scoreboard in the fifth inning when Posey launched Wheeler’s first pitch of the inning to left center for a solo home run. Wheeler quickly composed himself, striking out shortstop Brandon Crawford and outfielder Austin Slater looking. After walking pinch hitter Darin Ruff, Wheeler’s 0-2 pitch to Giants second baseman Tommy La Stella got belted for a two-run homer to right that cut the Phillies lead to 4-3.

In the Phillies’ half of the fifth inning, a two-run homer by third baseman Alec Bohm increase the lead to 6-3.

In the Giants’ sixth, Posey hit his second homer of the game to cut the Phillies lead to 6-4 while ending Wheeler’s night on the mound and putting it into the hands of a bullpen that he thought he could count on.

The Phillies have a chance to salvage at least one game from this three-game series when they take to the diamond at Citizens Bank Park Wednesday afternoon at 1:05pm. You can see the game on NBC Sports Philadelphia.