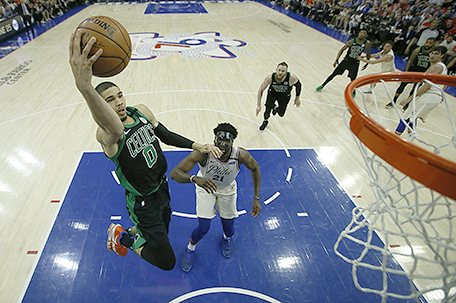 ABOVE PHOTO:  Boston Celtics’ Jayson Tatum in action during Game 4 of an NBA basketball second-round playoff series against the Philadelphia 76ers, Monday, May 7, 2018, in Philadelphia.   The Sixers lost to the Boston Celtics in Game 5 of the Eastern Conference 114-112.  (AP Photo/Matt Slocum)

Sure, there’s a lot for Philadelphia 76ers fans to be annoyed about regarding the team’s loss to the Boston Celtics in the Eastern Conference Semifinals. But there’s a lot to feel good about, too.

Sure, it’s easy to be upset about the Philadelphia 76ers season-ending loss to the Boston Celtics in Game 5 of Eastern Conference Semifinals.

The team’s inability to close out the Celtics late in the fourth quarter led to the 114-112 loss.  I also wouldn’t blame fans for being upset for blowing a 22-point lead in Game 2 or for the Sixers inability to make key buckets after getting it to overtime in Game 3.

“This was a hard-fought series,” said 76ers head coach Brett Brown after the game. There are possessions that you wish you had back and that’s life. The game changes with those types of fragile subtleties.”

But despite dashing the hopes of Sixers fans hoping for another championship parade and the fact that this loss came from the hated Celtics, the truth is that the team was playing with house money and this season, despite how it ended, should be looked at as a shining success. No one in their right mind thought that this youthful, inexperienced Sixers team would finish with a better record than the Eastern Conference finalist Cleveland Cavaliers, or finish with a 52-30 record that included a regular-season ending 16-game winning streak.

The team shocked the world.

“I think you’re able to acknowledge that this was special group and that you did some special things and truthfully [exceeded] expectations,” said Sixers shooting guard J.J. Reddick. “That doesn’t change our own expectations of what we thought we are capable of in this playoff run.”

Brown echoed Reddick’s sentiments and said his team will be seeing a lot of the Celtics for years to come.

“We talked about if we all sat in that room when we met back in September and said, ‘We’re going to lose in the Semifinals of the Eastern Conference, there’s a strong chance we all would have been hugging each other,” Brown said. “The initial goal was to make the playoffs.  The final piece is if we’re going to see anything of any significance, we’re always going to have to go through the Boston Celtics.”

What this edition of the Sixers did this season made the months after football season a lot more bearable for the city’s sports fans. Losing to the Celtics in the playoffs not only renewed an old rivalry, but also exposed what the Sixers need to do to get better as a team.

As good as Joel Embiid and Ben Simmons are, they both have plenty of room to grow as players. Observers been saying throughout the season that Simmons despite his ability to muscle his way inside the paint, he really needs to work on that jump shot. If he does that, he’ll have the potential of being mentioned in the same breath as NBA greats like LeBron James and Magic Johnson.

While Embiid is already a superstar in the NBA, he needs to focus on being a dominant force in the low post.  He’s more than capable of hitting the three-point shot, but he shouldn’t be the guy expected to do that when the game is on the line.

And what of rookie Markelle Fultz? After missing most of the season with what would some describe as a mysterious injury, Fultz showed flashes of brilliance. After watching Jayson Tatum’s appearance in the semifinals, Fultz needs to show everyone why he went number one in the 2017 NBA Draft over Tatum. The only way he’s going to stop the fans from having buyers remorse —-and saying that the team should have picked Tatum over him—-is to play like his life depends on it next season.

There’s no doubt that the Sixers will be looking at ways to add pieces through the draft and free-agency. The team needs a small forward who can consistently score and defend. As  good as guys like Ersan Ilyasova, Robert Covington and Marco Belinelli are from behind the arc, they were not as athletic as the quicker Celtics.

It would be nice if the team could somehow draft Villanova’s Mikal Bridges. He’s a solid shooter with a 7-foot wing span who also has solid defensive chops. More than likely, he’ll be gone by the time the Sixers are on the clock, but it would be nice.

There’s also a possibility, an admittedly far-fetched one, that the Sixers could win the LeBron James Sweepstakes. The league’s best player becomes a free agent after this year and fans have already been lobbying for him to come here. If that happens, the Sixers will be in the Finals next year and be favored to win it all.

While Sixers fans are hurting now, they have a lot to look forward to. It’ll take a while to accept this, but you will.