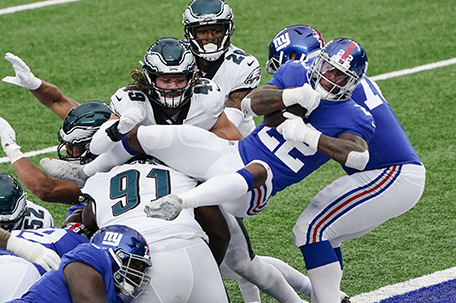 ABOVE PHOTO: New York Giants running back Wayne Gallman (22) jumps over defenders for a touchdown during the first half of an NFL football game against the Philadelphia Eagles Sunday, Nov. 15, 2020, in East Rutherford, N.J.  (AP Photo/Seth Wenig)

…Well, at least there weren’t any turnovers in the Philadelphia Eagles loss to the New York Giants.

EAST RUTHERFORD, NJ.—The Philadelphia Eagles 27-17 loss to a mediocre to bad New York Giants team on Sunday was a microcosm of a season where putting together a complete game has been elusive.

The Eagles (3-5-1) looked good at times, but they once again dug themselves a hole from which they couldn’t recover and, of course, no one can figure out why.

“Everybody’s frustrated, not just the coaching staff, players, too. The whole building,” said Eagles safety Jalen Mills. “It’s not just one person or one individual group … It’s self-inflicted wounds, penalties and everything that we’ve got hurt on throughout these games this season has been self-inflicted.”

Against the Giants, the Eagles didn’t commit any turnovers. For only the second time this season, quarterback Carson Wentz finished a game without committing a turnover. But they were 0-for-9 on third down conversions and committed 11 penalties for 74 yards.

“We’ve got to stop shooting ourselves in the foot,” said head coach Doug Pederson. “That’s the bottom line. All three phases had a hand in this loss today with the penalties and it’s not good enough.”

It hasn’t been good enough all season. The Birds as a team have had a lot of uneven performances. One week the defense struggles, the next it’s the offense.

This week, however, the struggle was on both sides of the ball.

“We definitely made it tough on ourselves, left some plays out there, and didn’t execute enough,” Wentz said. “O-for-9 on third down is extremely frustrating. That’s something that we pride ourselves on is staying on the field on third down and we didn’t do that (Sunday)”

The Eagles lackluster performance spoiled the return of players like running back Miles Sanders, who gained 85 yards on 15 carries. But Sanders against the Giants turned out to be “empty calories” because the offense was too inconsistent to find any kind of rhythm.

To be honest, the Giants just came out and took the game to the Eagles, who were supposedly well-rested coming off the bye week. On the game’s first drive, New York drove 85 yards in eight plays to their first score of the game, a 34-yard touchdown run by quarterback Daniel Jones.

New York added another touchdown on its next possession with a two-yard touchdown run by running Willie Gallman and the Giants held a 14-3 lead at the half.

The Eagles got back into the game on their first possession of the second half thanks to an electrifying 56-yard run by Boston Scott. Miles Sanders run on the two-point conversion cut the Giants lead to 14-11.

But the Giants answered the Eagles touchdown with a quick scoring drive of their own. They moved 75-yard in six plays to a one-yard run by Gallman to give New York a 21-11 lead with 8:16 left in the third quarter.

The Eagles, on their next possession, cut the lead the Giants lead to 21-17 on a five-yard touchdown run by Corey Clement. But instead of kicking for the extra point which would have cut to three, the Birds tried another two-point conversion but failed. That’s as close as the Eagles would get, and they would not score in the fourth quarter.  The Giants added a pair of field goals to put the game away.

The Eagles, who are still in first place in the NFC East, have a tough stretch of games where they have to play playoff contenders like the Cleveland Browns, Seattle Seahawks, the Green Bay Packers, and the New Orleans Saints. The Eagles can ill afford turnovers, penalties or to go 0-for on third down conversions. This could be a season-defining sequence of games for the Birds.

Or maybe not. They are in the NFC Least.

The Eagles take the field on Sunday against the Cleveland Browns at 1pm on Fox 29.

The Battle For The NFC Least