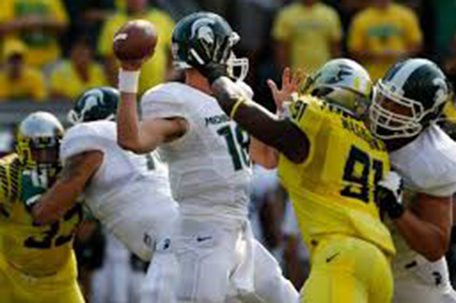 ABOVE PHOTO:  Michigan State quarterback gets a hard rush from Oregon linebacker Tony Washington. Spartan loss to Oregon has apparently eliminated the Big 10 from playoff consideration.

The aftermath of last Saturday’s college football games has me shaking my head and coming to the conclusion that the new four-team college football playoff format is seriously flawed even before it begins.

The premier programs of the Big-10 Conference all fell to defeat on Saturday. Seventh-ranked Michigan State lost to No. 3 Oregon, eighth-ranked Ohio State lost to unranked Virginia Tech and Michigan got shut out 31-0 by Notre Dame.

Those high-profile non-conference losses not only cast doubt on the conference’s credibility, but according to several college football media people, it has eliminated the Big-10’s chances of having a team in the new college playoff this season.

The headline on ESPN.com Sunday morning was crystal clear about that: “Big Ten Busted After Two Weeks.”

Really? Two weeks into the season and we’ve eliminated an entire conference from playoff contention?

If you’re thinking there’s something wrong that, you’re absolutely right.

Now before you go off thinking that I’m feeling sorry for the Big-10, I’m not because they signed up for this madness.

What’s really under indictment here is the idea that the five power conferences, including the Big-10, came up with a format for themselves that had already eliminated the other five conferences—the Sunbelt, Mid-America, Conference USA, the Mountain West and the American Athletic Conference from competing for a national championship.

But, they probably won’t think of doing it until the Southeastern Conference or SEC schools find themselves where the Big-10 is now. In the cycle of sports, all conferences go through their share of down years.

As it stands now, the College Football Playoff will be here for the next 12 years thanks to a $5.64 billion TV deal the super conferences made with ESPN.

A 13-person committee selects the teams for the two semifinal games while teams representing the “big five” will fill the other four bowl games with one guaranteed spot going to the highest-ranked representative from the five mid-major conferences.

The bone they throw to the Mountain Wests and Conference USA’s of the world is nothing more than a pat on the head.

Unlike the equality of the NCAA basketball tournament where smaller schools are allowed to compete, the current College Football Playoff allows no room for a similar Cinderella story.

So when a team out of a Conference USA or Mountain West goes undefeated or has a solid record, they won’t get the opportunity to test itself in the spotlight.

Under this system, the smaller FBS conferences are marginalized to play in meaningless Bowl games without the opportunity to compete for a national championship. That to me is shameful because the power conferences want to hoard the money and resources for themselves.

And so this brings us back to the Big-10’s so-called “elimination” from College Football Playoff in just the second week, this is a good reason for expanding the field. It’s ridiculous to say that a team representing any conference is out of playoff contention in early September.

Again, I have no sympathy for the Big 10 or any of the five super conferences who may not have a team in January’s playoffs because you created a playoff system that froze out the five smaller conferences. It is a screwed up by-product of your own insular elitism and greed.

I’ve always said that there needs to be a 16-team playoff system where the conference champs of all 10 FBS conferences get automatic bids while the six at-large bids go to the highest ranked non-conference champions. That’s more fair because one loss in week two on the way to winning a conference title should not knock you out of the playoffs before October.

Unfortunately, the idea of equality of any kind in big-time college sports is a foreign concept, whether it’s giving a mid-major program like Boise State a legitimate chance to compete for a national championship in football or even sharing a percentage of the revenue with the student athletes.

The Bernard Hopkins of Football