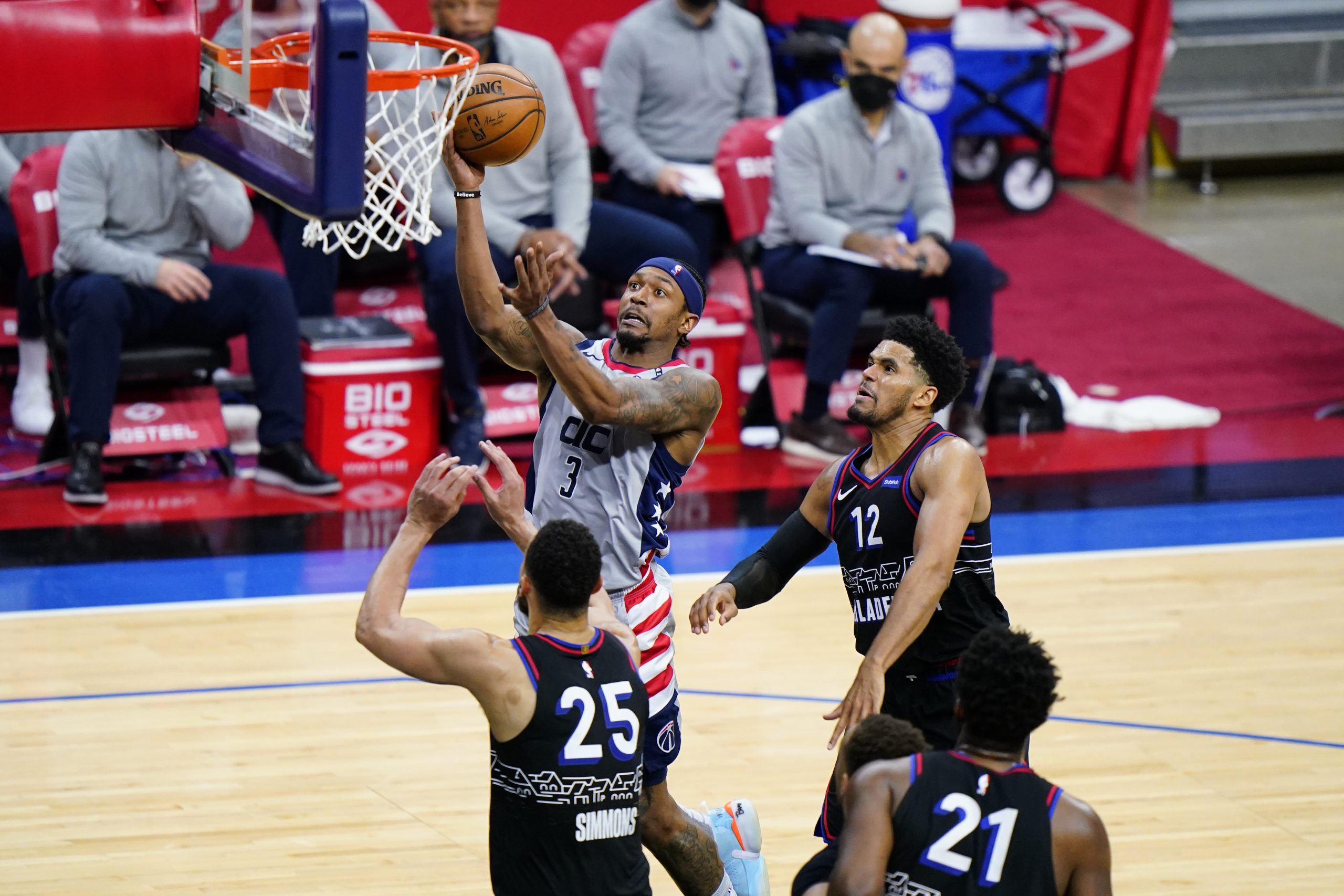 Above photo: Washington Wizards’ Bradley Beal (3) goes up for a shot against Philadelphia 76ers’ Ben Simmons (25) and Tobias Harris (12) during the second half of Game 2 in a first-round NBA basketball playoff series, Wednesday, May 26, 2021, in Philadelphia. (AP Photo/Matt Slocum)

While the rest of the world wants to give the NBA’s Eastern Conference to the Brooklyn Nets, the Philadelphia 76ers big three of Joel Embiid, Ben Simmons, and Tobias Harris are challenging that.

For all the talk about Kevin Durant, James Harden, and Kyrie Irving making the Brooklyn Nets the team to beat in the NBA’s Eastern Conference Playoffs, the Philadelphia 76ers have their own trio of superstars that folks are sleeping on right now.

And they really shouldn’t.

In the first two games of the Sixers Eastern Conference series against the Washington Wizards, the Sixers trio of Joel Embiid, Ben Simmons, and Tobias Harris have dominated and given their team a 2-0 lead in the best-of-seven series.

In each game, the Sixers Big 3 have had a major impact on both ends of the floor.

In-game two, both Embiid and Simmons both scored 22 points and Harris added 19 in the Sixers 120-95 win. The 76ers starting five shot 68 percent from the field.

In this game, it was Simmons who set the tone by aggressively taking the ball to the basket while still playing the role of facilitator on offense and an aggressive defender on defense. Offensively, Simmons hit 11 of his 15 shots. The former LSU star started the game hitting six of his first eight shots. He had eight assists and pulled down nine rebounds.

“Every game there’s adjustments,” Embiid said. “In the first game, (Simmons) took what the defense gave him. He made plays and he got guys open, he had 15 assists. In Game 2, he saw that the defense didn’t want to leave me alone, and he had a lot of space with a one-on-one match up and he took advantage of it.”

Simmons was able to drive to the basket at will because the Wizards were so concerned about stopping Embiid in the low post and the shooters out on the perimeter that they gave him space to operate.

“When they don’t give space, that means that Ben is going to drive and kickoff. He’ll create points by passing,” Sixers’ head coach Glenn “Doc” Rivers said. “When they do give space, then Ben drives to score. (Wednesday night) They (the Wizards) changed what they were doing to Embiid which gave Ben more room. They were also spreading out to our shooters which gave Ben more room and he was great and took advantage of it.”

Whether he is putting the ball in the hoop, or getting it to a teammate, Simmons has certainly made his presence known in this series.  In Game 1, Simmons scored just six points on 3-of-9 shooting but dished out 15 assists and pulled down 15 rebounds. He received some criticism for not scoring.

But when you’re not scoring, it’s still good to get others involved and that’s the thing Simmons did in Game 1. Those assists enabled Harris to score 37 points and Embiid to add 30 points and Seth Curry to score 15 points with three-point buckets.

“What I did in the first game, my guys were feeling it,” Simmons said. “Tobias was feeling it, Joel was scoring. That’s the point of basketball because when people got it going, you give them the basketball.”

One of the beneficiaries of Simmons’s spirit of sharing the basketball has been Harris who is having an All-Star season even though he was snubbed for the game itself. With Embiid struggling with foul trouble, Harris became the number one option and became the first 76er since Hall of Famer Allen Iverson to score 37 points in a playoff game.

“He’s been great He’s been good all season,” Embiid said. “The same thing I said about (Simmons). We’re going to need him to be aggressive and efficient.”

See who takes charge in Game 3 of the Eastern Conference Playoffs on Saturday at 7 p.m. on ESPN when the Sixers and the Wizards take the floor at the Capital One Center in Washington, D.C.