The battles for seeding still going strong in NBA races 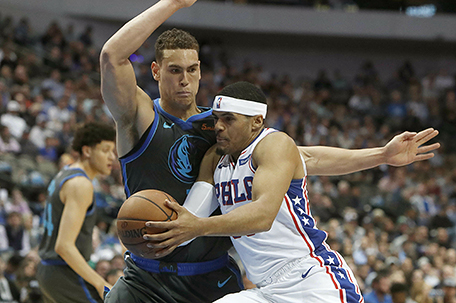 A look at where things stand in the NBA playoff picture, with seven days remaining in the regular season:

Milwaukee is on the verge of clinching the NBA’s best record, which would lock the Bucks into the No. 1 spot. Toronto would then be No. 2 in the East, and Philadelphia has the edge over Boston and Indiana for the No. 3 seed. The Celtics and Pacers play on Friday, with the winner of that game taking a huge step toward the No. 4 seed and home-court in the first round.

Everything else in the East is a mess.

All eight spots have been clinched since late last week, and now it’s all about seeding.

Not a single one of those has been locked up yet.

Denver routed San Antonio — Spurs coach Gregg Popovich was ejected 63 seconds into the game — to get within 1½ games of Golden State for the No. 1 spot. Houston rolled past the Los Angeles Clippers to remain No. 3, still a half-game ahead of No. 4 Portland, even after the Trail Blazers beat Memphis.

The Spurs fell one spot to No. 8 after their loss to the Nuggets.

Golden State has a huge edge in the race for the No. 1 seed — four of its five remaining games are against teams that are missing the playoffs, and the other one is against the Clippers in the final regular-season game that will be played at Oracle Arena. Motivation will not be in short supply for the reigning champions in that game on Sunday night.

Denver’s schedule is brutal: The Nuggets still play Portland twice, plus Utah and end with Minnesota. Given that Houston has three games left and two of them are at home against New York and Phoenix, it’s hard to see the Rockets going any worse than 2-1 the rest of the way. That means the Nuggets have some work to do just to lock up that No. 2 spot.

There are two games on Thursday’s schedule with playoff implications.

— Milwaukee at Philadelphia: Two teams that don’t like each other very much, and after this they almost certainly can’t see each other again before the Eastern Conference finals. Milwaukee can wrap up the No. 1 overall seed and home-court advantage for the entirety of the NBA playoffs with one more win (or one more Toronto loss). Philadelphia expects to have Joel Embiid, who has been getting time off to rest his knee, back for this game.

— Golden State at L.A. Lakers: The Warriors are on the cusp of locking up the No. 1 seed for the Western Conference playoffs, and it’s a reasonable guess that they would prefer the final two games of the regular season (a back-to-back at New Orleans and Memphis) not mean much in terms of playoff positioning.

— Games with no playoff implications: Cleveland at Sacramento.