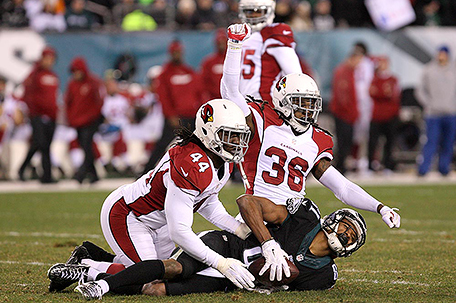 To tell you just how bad the NFC East is, despite taking a thrashing at the hands of the Arizona Cardinals on Sunday, the Philadelphia Eagles (6-8) can still win the NFC East and make the playoffs.

If the Birds can win their final regular season games, two games including this Saturday’s final regular-season game against the Washington Redskins (7-7) at Lincoln Financial Field.

To beat Washington, the Eagles have to figure out a way to get their running game going, whether it’s DeMarco Murray, Ryan Mathews or newly minted Pro Bowler Darren Sproles.

Last week against the Cardinals, the Birds could muster just 74 yards on the ground. What was curious about that situation was that Murray got just two carries the entire game.

The NFL’s leading rusher in 2014 spent most of the time on the sideline in a must-win situation. That was the hot topic of conversation this week during Chip Kelly’s press conference on Monday.

He defended not utilizing his multimillion-dollar superstar running back.

As a group, the Eagles are averaging 112 yards per game and 3.9 yards per carry, which ranks them 13th in the league. Murray actually leads the team in rushing with 606 yards, but is only averaging 3.4 four yards per carry.  The problem here is that the Eagles coaching staff has yet to figure out how to utilize Murray’s skills as a running back.

This week the Birds defense will face a Washington offense led by a much-improved quarterback Kirk Cousins, who arguably had his best effort of the season in the Redskins 35-25 win over the Buffalo Bills last Sunday.  He completed 22-of-28 passes for 319 yards and four touchdowns including a 77-yard touchdown pass to former Eagles receiver DeSean Jackson. Cousins also had a touchdown rushing.

The last time Washington and Philadelphia played back on Oct. 5 in Landover, Maryland, Cousins led the Redskins on a 90-yard scoring drive that culminated in a late game-winning touchdown pass to Pierre Garcon.  The bad news for the Eagles defense is that Cousins has gotten better since then, especially with weapons in the passing game like Jackson, tight end Jordan Reed and Garcon, who has become the go-to guy in the red zone.

“Right now this offense, the Redskins’ offense, they’re playing as well as they’ve played all season. DeSean is getting vertical balls at a high rate. He’s got the highest yards-per-catch. He’s DeSean. He blows the top off of everything. We’ve got to be aware and over the top of him and have a lot of concentration on him,” said Eagles defensive coordinator Bill Davis. “But then you break down and [Redskins TE Jordan] Reed is getting all the balls. [Redskins WR] Pierre Garcon is a running back and receiver, extremely good at run after the catch.”

Meanwhile, Pro Bowl defensive end Fletcher Cox said the Birds will come into Sunday’s game against Washington determined to make up for their poor performance against Arizona, a game in which they didn’t tackle well.

“We know what we have to do because we know that Sunday (against Arizona) was unacceptable,” said Cox, who was named to the Pro Bowl with Sproles and left tackle Jason Peters on Tuesday. “We didn’t tackle well and they scored a lot of points on us. That game is  behind us and we have to focus on Washington. It’s going to come down to tackling and stopping the run.”