The Battle for Rookie Supremacy 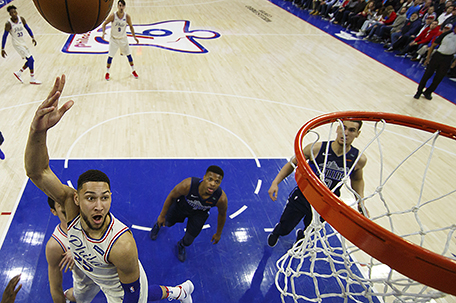 ABOVE PHOTO:  Philadelphia 76ers’ Ben Simmons, left, of Australia, shoots during the second half of an NBA basketball game against the Dallas Mavericks, Sunday, April 8, 2018, in Philadelphia. The 76ers won 109-97. (AP Photo/Chris Szagola)

Sixers point guard Ben Simmons is one of the frontrunners for the NBA’s Rookie of the Year Award.  Here’s why they need to just hand it to him now.

It’s NBA Rookie of the Year time, who you got?

Until a couple of weeks ago, it looked like it was Donovan Mitchell’s award to lose. The Utah Jazz shooting guard is having a solid rookie season, averaging 20.5 points and nearly four assists a game while shooting 44 percent from the field overall and 34 percent from three-point range. The former Louisville star is also Utah’s leading scorer and one of the big reasons the 48-33 Jazz are ranked third in the Western Conference.

Then Ben Simmons, the point guard for your Philadelphia 76ers, started going off.

From the moment that Joel Embiid got sidelined due to a broken orbital bone, the Australian from LSU has put the Sixers on his back and has averaged a triple-double through the team’s season-ending 16-game winning streak with his best game coming against the defending Eastern Conference champion Cleveland Cavaliers last Friday.

In the Sixers 132-130 win over the Cavs, Simmons had notched his 12th triple-double of the season before the end of the third quarter. He scored 27 points, pulled down 15 rebounds, and had 13 assists.

It’s performances like this and the ability he’s shown to make his teammates better that makes me say, with all due respect to Mitchell, that Simmons would be my pick without hesitation if I had a vote.

Now technically, you could make the argument that Simmons isn’t eligible for the award because he’s actually in his second year in the league. Simmons missed all of last year due to an injury, something that Mitchell pointed out by taking to Instagram wearing a hoodie with the definition of the word “rookie” on it.

But Sixers head coach Brett Brown ain’t trying to hear you on that.

“He is the stone-cold Rookie of the Year,” Brown said before Tuesday’s win over the Atlanta Hawks.  “It’s not even close. It’s up to others to decide, but it’s my strong opinion that he is the Rookie of the Year.”

And Simmons isn’t either.

Now, Simmons’s critics will point to his inability to hit anything resembling a jump shot as a reason not to give him the award. Had that part of his game been better developed this year, we wouldn’t be having this conversation because Rookie of the Year would be a landslide victory for him.

But Simmons really doesn’t need a jump shot to be Rookie of the Year. He’s been able to score — and put his teammates into position to score — without one.

For the season, Simmons is averaging 15 points, 8.2 assists and 8.2 rebounds per game. Along with Embiid and a whole host of other shooters that can hit the three-point shot, Simmons is one of the reasons that the Sixers go into their first round Eastern Conference playoff matchup against Miami Heat as the one team that no one wants to play.

Most of us, including me, didn’t see the Sixers winning 50 games, much less ranking third in the Eastern Conference. I thought that finishing a few games above .500 and maybe getting the seventh or eighth playoff spot would represent a good year for this squad.

But the Sixers have exceeded their fans wildest dreams, and Simmons, his unselfish play and his ability to take over games when the team needs him to, are a big part of why the team has home court advantage in the first round of the playoffs.

It’s also why the NBA needs to just hand him the Rookie of the Year Award.