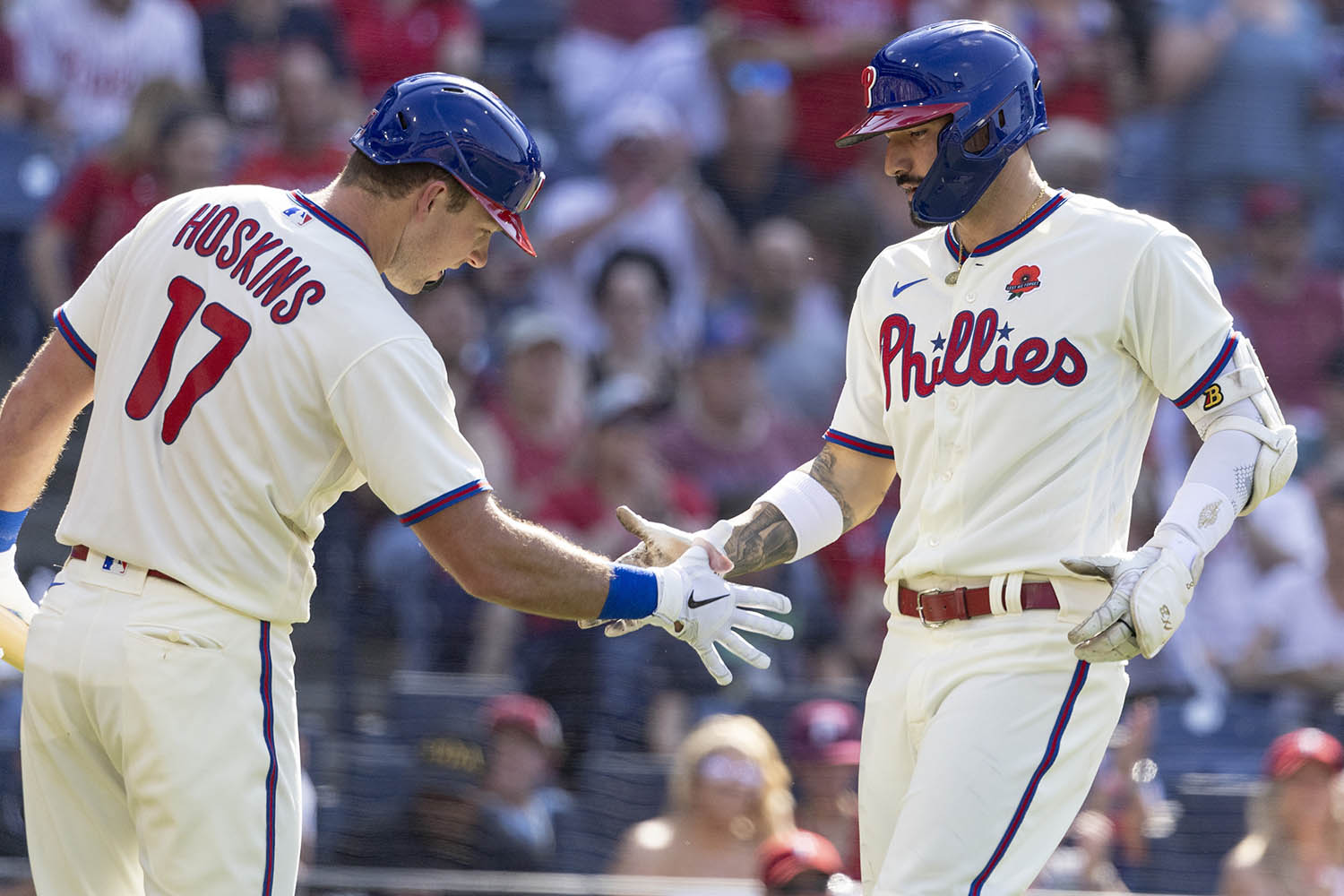 The Phillies’ latest loss to the San Francisco Giants showcases why the Phillies are at the bottom of the National League East.

Above photo: Philadelphia Phillies’ Nick Castellanos, right, is congratulated by Rhys Hoskins (17) after hitting a home run in the second inning of a baseball game against the San Francisco Giants, Monday, May 30, 2022, in Philadelphia. (AP Photo/Laurence Kesterson)

The Philadelphia Phillies’ 7-4 loss to the San Francisco Giants in extra innings was not only their fifth straight loss, but a microcosm of a season that appears to be headed in the wrong direction.

Between fielding errors (the Phillies committed two of them), poor relief pitching and inconsistent hitting from a team that was touted for its firepower, the Phillies (21-29) are in every way, playing like a team that is eight games below .500. The team finished May with a 10-18 record and have lost 10 of their last 14 games dating back to May 15.

As June approaches, the Phillies are 11.5 games out of first place, way behind the red-hot New York Mets.

“June has to better,” said Phillies manager Joe Girardi. “These last two weeks have been really frustrating for our club. We’ve had a lot of tough losses. The way we’ve lost the last two games in extra innings has been really tough. We’ve had opportunities to win — we just haven’t been able to do it.”

To add injury (literally) to insult, the Phillies may have to start climbing back into contention without second-baseman Jean Segura. Segura, who is also one of the team’s more consistent hitters, suffered a fractured right index finger in the extra inning loss.

After the Phillies tied the game in the bottom of the 10th inning when Roman Quinn scored on an RBI single by Alex Bohm, the Giants came back in the top of the 10th and scored three runs off Phillies reliever Andrew Bellati. A two-run homer by designated Joc Pederson and an RBI double by shortstop Donovan Walton that scored catcher Joey Bart.

Meanwhile, inside a quiet Phillies clubhouse, the Phillies players themselves are trying to figure out how to jumpstart a season that seems to be getting away from them with each tough loss.

“There’s been a lot of close games … and we just kind of ended up on the other side, and it’s fortunate,” said Phillies leftfielder Kyle Schwarber. “Obviously, we’re not trying to go out there and not get the job done. The preparation is there. It’s unbelievable.  … We just got to keep moving and show up for the next day. We’ve got to learn about yesterday and today and we gotta let it go.”

Schwarber said the Phillies are lot better than what their record is right now, but at some point, they’re going to have start putting together wins.

“I definitely think that we’re better than that record shows, but we have to find a way to win baseball games,” Schwarber said. It’s not given to you, but we’re going to keep working for it.”

The Phillies jumped out to a 1-0 lead in the bottom of the fourth on RBI fielders’ choice from short to second by J.T. Realmuto that scored Segura from third and forced out first baseman Rhys Hoskins at second.

But the Giants would bounce back in the top of the fifth inning by scoring three runs. The first two coming from a two-run double from leftfielder Luis Gonzalez that scored second baseman Thairo Estrada and third baseman Tommy LaStella. Centerfield Mike Yastrzemski drove in the third run on a sacrifice fly to center that scored LaStella from third.

The Phillies tied the game in their half of the sixth on an RBI single by Realmuto that scored right fielder Nick Castellanos and when Odubel Herrera bounced into a double play that scored Hoskins from 3rd.

In the Giants half of the 10th inning, Pederson singled on a ground ball to Hoskins but a fielding error by relief pitcher Jeurys Familia, who didn’t get to first base on time enabled first baseman Wilmer Flores to score from second.

Now that the calendar has changed months, the Phillies are hoping that their fortunes will as well. The team takes the field against the Giants again on Wednesday at 6:05pm on NBC Sports Philadelphia.