The ‘Answer’ is clear… 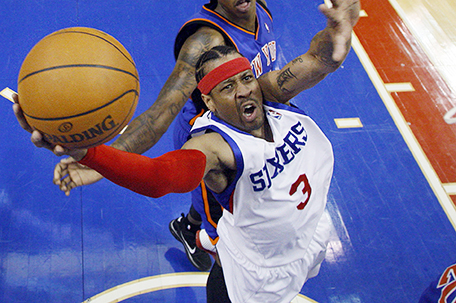 ABOVE PHOTO:  The great Allen Iverson in action as a Sixer. (AP Photo/Matt Slocum)

Whenever a controversial, oft-times polarizing Black athlete is on the first ballot of any sports Hall of Fame, I usually end up writing a column about how this person should have gotten in based on what he or she did on the field, and the injustice of off field behavior keeping them out.

So when I got the word that Philadelphia 76ers icon Allen Iverson was among those being considered for membership in the 2016 Class of the Naismith Basketball Hall of Fame, I was all set to write another on of those columns. Despite his achievements as a player, I thought that Iverson’s off-court behavior, most notably the speech that gave us the phrase “We talking about practice,” would be held against him.

But unlike the Baseball Hall of Fame and to the Pro Football Hall of Fame to a lesser extent, the NBA Basketball writers looked at Iverson’s spectacular career on the hardwood and gave him the much deserved honor of being a first-ballot Hall of Famer.

If there’s anything really cool about the passage of time, it is that our collective memories have a way of reminding us why we cheered for our heroes in the first place while diminishing what we may have found negative about them.

If you’re like me, you’re reading this and your mind is playing a highlight reel of Iverson’s career. You’re seeing a young Iverson leading his Georgetown Hoyas to the Elite Eight back in 1996 or watching him as he put on the 76ers cap as the team’s first-round draft pick that year.

For the rest of your life, you will be that old man at barbershop telling the young’uns about the day you saw a young Iverson utilizing his trademark crossover on Michael Jordan or elevating his barely 6-foot frame to slam-dunk a missed Derek Coleman shot in the face Detlef Schrempf.

Or maybe you’re that young professor at Temple or at the University of California-Berkley teaching your students about how Allen Iverson became an iconic figure for basketball’s hip-hop generation with an uncompromising style that included braids, tattoos and a certain amount of defiance. He refused to make himself palatable to a conservative White audience that preferred it’s Black athletes seen and not heard.

He was his own man, and he didn’t care who knew it.

As much as we all remember the Sixers 1983 championship team that featured Julius Erving, Moses Malone and Mo Cheeks, the memory of Iverson putting his teammates on his back and leading the Sixers to the 2001 NBA Finals probably takes up a lot of space on your personal Iverson Highlight Reel.

Sure, you knew in the back of your mind that the Los Angeles Lakers had too much power for the scrappy Sixers squad, but Iverson’s passion for the game make you believe that David could take out Goliath with just the right slingshot.

You’ll also never forget that Game 1 win in Los Angeles when Iverson broke Tyronn Lue’s ankles, hit the basket and then walked over the fallen Lue on his way to the next play.

The winner of the 2001 League Most Valuable Player award, two All-Star game MVP awards and several scoring titles will be among the things you feature when you’re comparing The Answer to the game’s All-Time greats when you get in your social media chat room, during a Happy Hour at the Platinum Grille or on the Broad Street line as you’re heading to work.

Some of you can still find that old Iverson jersey you bought back 2000 or 2001. You might even be heading to Mitchell and Ness as we speak for a new one. I mean hey, he is a Hall of Famer.

With Iverson streaking across the tracks of your memory, you’ll remember both the good and bad times, the last second buckets, and how he put his hand to his ear as he heard you cheer.

You’ll probably call him a lot of things. The Answer. A Sixers Icon. Bubba Chuck. More than a little troubled.

But one thing you’ll have to call him now is, NBA Hall of Famer.

Congratulations, Allen! I can’t wait to see your Hall of Fame speech.