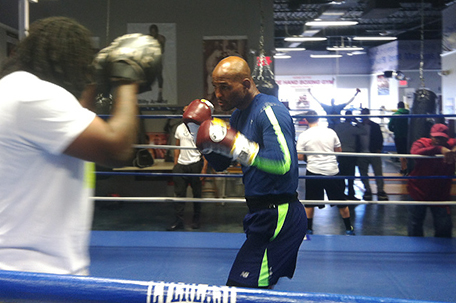 ABOVE PHOTO:  Bernard Hopkins training for next fight.  (Photo by Chris Murray)

Bernard Hopkins has lined up his next challenger, just in time for his 50th birthday.

For his next boxing match against a younger opponent and Father Time, Bernard Hopkins will take on unbeaten World Boxing Organization champion Sergey “The Krusher” Kovalev in a light-heavyweight unification bout.

The 49-year-old Hopkins, who now calls himself the “Alien,” is scheduled to take to the ring against Kovalev at either Atlantic City’s Boardwalk Hall or Brooklyn’s Barclay Center in November.

Kovalev (25-0-1, 23 knockouts) might represent Hopkins’ toughest challenge to date. He’s fresh off a devastating second-round knockout of previously unbeaten Australian Blake Caparello. In that fight, Kovalev bounced back from a flash knockdown by Caparello and then knocked him down three times before the referee called a halt to the bout at the 1:47 mark of the second round.

But what makes him a tough matchup for Hopkins is that Kovalev might be the hardest puncher that the ageless Hopkins has met at this stage of his career.

Kovalev is a methodical, straightforward fighter who can hurt you with either hand. He’s also a disciplined boxer that can break opponents down by going to the body before going to the head. The 31-year-old native of Cheylabinsk, Russia, has knocked out his last nine opponents.

But Hopkins, who holds the International Boxing Federation and World Boxing Association light heavyweight titles, has been in the ring against several hard-charging, hard punching fighters like Kelly Pavlik and Antonio Tarver and has come out of those battles victorious.

Hopkins seems to relish those matches against aggressive young fighters who like to come forward so he can so he can find their weaknesses and take advantage of them. That’s why Hopkins is confident that he will get the same result against the hard-punching Kovalev and be the oldest boxer to hold an undisputed title.

“I’ve set and broken many records, but becoming the oldest undisputed light heavyweight champion is the goal and Kovalev stands in the way of that goal,” Hopkins said. “He’s another young, hungry [boxer] and just like the ones that came before him, he will leave the ring beltless.”

Over the years, I’ve learned to never to underestimate Hopkins’ guts and guile. Like many other boxing writers, I have counted him out on numerous occasions and have predicted that there was going to come a point where his age was going to become a factor in the ring.

But he’s managed to prove all of us wrong. Heck, he hasn’t even been beaten to a pulp in his losses.

The big question here is if his vast defensive skills and experience will be enough to withstand the vicious onslaught of Kovalev. This is a guy who has enough power in both hands to either knock another fighter into next week or have him eating soup for a few weeks with a vicious shot to the body.

“He says he is alien. He punch, I punch, then we see who gonna go to Mars,” Kovalev said.

While it’s easy for us to wonder why the hell Hopkins is back in the ring at his age in another battle against a younger, stronger, faster fighter capable of hastening his retirement with one punch, you have to give Hopkins credit for making it interesting.

It’s like an addictive reality show because with Hopkins you never know what’s going to happen next.

Fight or retire: What’s next for Bernard Hopkins after loss to Chad Dawson