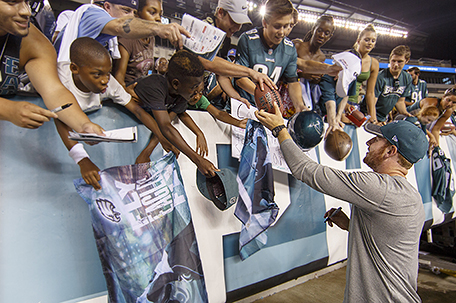 The Carson Wentz Era has begun a little early for the Philadelphia Eagles, much to the surprise of everyone.

The Philadelphia Eagles will be starting rookie Carson Wentz at quarterback when they take to the field against the Cleveland Browns at Lincoln Financial Field on Sunday.

But unlike most rookie debuts of this kind here in the City of Brotherly Love, the hype and anticipation have been dialed back—a lot.

In fact, the only thing that’s been really exciting about the Carson Wentz Era is how it began. Howie Roseman, the team’s vice-president of football operations, veteran quarterback (and butt of many jokes involving bubble wrap) Sam Bradford to the Minnesota Vikings for a 2017 first-round draft pick.

Well, at least the Eagles fans who will be attending next year’s NFL Draft on the Benjamin Franklin Parkway will have a reason to put on their best Eagles costume and head out for the draft’s first round. The Eagles didn’t have a first-round pick in next year’s draft due to the fire sale the team had last year to put them in the position to draft Wentz.

If we’re honest with ourselves, we knew that Wentz was going to be the starting quarterback at some point. It just happened sooner than later. With Sunday’s season opener looming in the horizon, head coach Doug Pederson simply said, despite the fact that backup quarterback Chase Daniel took most of the snaps in pre-season, that Wentz is ready to be the Birds starting because of what he saw from the former North Dakota State star throughout the course of training camp.

“The plays that he has made in practice going against even our starting defense, just the way he has handled things – the way he calls plays in the huddle, the way he can just spit out the verbiage, his athleticism, the way he can move and scramble and make some plays with his legs, much like RGIII (QB Robert Griffin III) can do, it just felt so comfortable putting him in this spot.,” Pederson said.

Wentz says he’s ready and confident that he can move the team despite missing time because of a rib fracture.

“Obviously, missing some reps in the preseason was frustrating, but I feel very ready,” Wentz said during a conference call with the Cleveland media. “I feel very confident. I have felt ready for a while now. Missing the reps, it kind of is what it is, but I’m very confident that I’m ready to go.”

But while Wentz and Pederson are putting on brave faces, let’s be honest here.

Wentz is the poster child for that old sports cliché “being thrown to the wolves”. He has doesn’t really have any weapons around him at the skill positions.  The running backs and receivers are average at best.

The burden of the Eagles offense will fall on an improved offensive line, which means they’re going to be opening up the holes in the running game and protecting Wentz in the passing game.

“We have to make sure he has time to go through his progressions and sees what he needs to see to get the ball out,” Eagles right guard Brandon Brooks said. “You don’t want to give him any extra things to worry about other than getting the ball to the receivers. When he’s in there, he takes control of the huddle well. He knows the offense pretty well.”

Let’s face it, the Eagles don’t really have anybody outside Darren Sproles that’s a true threat to take it to the house or flip field position on one play. While wide receiver Jordan Matthews is a pretty good wide receiver and could be on the verge of being one of the best in the league, he’s not there yet. He was also injured during training camp (bone bruise-knee) and didn’t get the chance to practice with Wentz much, something he’s been trying to rectify this week.

Ryan Mathews is the Birds starting running back, but can the Eagles count on him to stay health for 16 games?  During his days in San Diego, Mathews proved that he can be a solid lead back.  Sproles will be used in third down passing situations and will get some carries to spell Mathews.

Meanwhile, Kenjon Barner, who had a solid training camp, will no doubt get his share of carries along with rookie Wendell Smallwood.

Wentz is not a bad runner himself, but if he’s doing all the running this season, it’s going to a be a long season for the Birds.

Michael Vick wants to be a starter, but it won’t happen in Philly