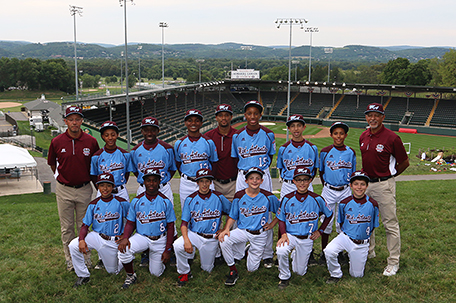 In 2005, I did a series of stories for the Philadelphia Tribune on the declining number of African-Americans in Major League Baseball.

One of the people I interviewed for the story was Negro League Baseball legend Buck O’Neill, former manager of the Kansas City Monarchs.  As we talked about how to turn the tide, O’Neill said that programs like the Reviving Baseball in the Inner City, or RBI, would help because he was convinced that once Black kids started playing baseball, they’d grow to love it.

That two of the remaining teams in the Little League World Series–Philadelphia’s own Taney Dragons and the Jackie Robinson West team from Chicago—are teams that feature Black kids proves that O’Neill might have been on to something.

Somewhere in the heavens, the performances of the all-Black Jackie Robinson West team and Taney pitcher Mo’ne Davis are making O’Neill smile. Both teams have been the talk of the summer classic of the country’s best 12 and 13-year-old baseball players held in Williamsport, Pennsylvania.

As her team’s best player and pitcher, Mo’ne is giving new meaning to the phrase “throws like a girl”. With a 70 mile-per-hour fast ball, the 5-foot-4, 13-year-old pitcher has been mowing down her competition.

Mo’ne has led the South-Philadelphia based Taney Dragons, the first team from the city to make it to the LLWS, to a 3-1 record so far in the Little League World Series.

As the first girl to throw a shutout in a Little League World Series game, Mo’ne is the first Little Leaguer and the youngest athlete to be on the cover of Sports Illustrated. She gave up three runs and struck out six in three innings of work in Taney’s 8-1 loss to Nevada on Wednesday.

(Which might also make her the youngest victim of the dreaded SI jinx, but we’re not going to talk about that…)

The success of Mo’ne and the Dragons has had fans from around the country glued to their TV sets. Folks ranging from First Lady Michelle Obama to NBA Hall of Famer Magic Johnson have praised the female hurler and WNBA star Britney Griner is looking for Mo’ne’s jersey.

(I wish you luck on that one, Britney. They’re selling like hotcakes!)

But while Mo’ne Davis is making young girls practice their curveball grip, Taney’s just one of the LLWS’s big urban baseball stories. The kids from the all-Black Chicago Jackie Robinson West team are also making history.

Jackie Robinson West is the second team from Little League Baseball’s Urban Initiative to make it to Williamsport. By the time you read this, the champs of the Great Lakes Region will have taken on Taney for the right to face Nevada in the U.S. Championship game.

Coming from an urban center known for its crime, violence and poverty, the kids from Jackie Robinson West have been a breath of fresh air to a city where hope oftentimes doesn’t exist.

It’s also a team that knows how to bounce back from adversity. After a 13-2 loss to Nevada in a game that was called after four innings due to the Mercy rule, the kids from the Southside of Chicago found themselves on the short end of a 7-6 deficit against the team from Cumberland, Rhode Island coming into the fifth inning.

But the hard-hitting team from Chicago rallied to score two runs to take the lead and thanks to some outstanding relief pitching held on to win 8-7.

At a time when costs for the game including gloves, bats and other equipment run into the thousands, watching the performances of the Taney Dragons and Jackie Robinson West have taken the edge off of a summer where violence and racial tensions have been far too prominent.

I don’t know if seeing these two groups of kids playing in Williamsport will spark a renaissance of urban baseball that will bring the percentage of American-born Black players in the major leagues up its current 8 percent, but it’s a step in the right direction.

It’s also enough to bring a smile to the faces of Buck O’Neill, Satchel Paige, Josh Gibson, Jackie Robinson and the rest of Black Baseball’s ancestors.