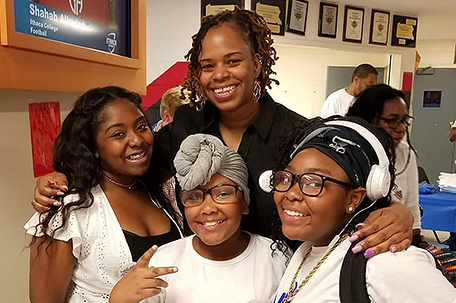 ABOVE PHOTO: Tamika Milburn with her “Young Misses”

The importance of mentorship has been proven time and time again. There have been countless studies that highlight the benefits of young people participating in sports programs. According to health.gov, young people who participate in sports programs experience lower rates of anxiety and depression, reduced stress, increased creativity, and higher self-esteem. The combination of mentorship with sports programs is invaluable. Young women in sports, unfortunately, do not have many opportunities to be mentored by professional female athletes.

Tamika Milburn, a Philadelphia native and disabled U.S. Air Force veteran, is taking on the task of bridging that gap. Milburn spoke to The SUN about her work as the commissioner of the Women’s Professional Basketball Association (WPBA) and as a founder of Young Misses as a way to offer young women guidance and mentorship.

Milburn always knew that she wanted to be in the Air Force. She served for seven years and 19 days before being medically discharged when she developed asthma. As a result, Milburn battled with depression and struggled to find her new path. Her work with Homeland Security eventually led Milburn to her current mission.

“I met a few pro athletes really by accident,” Milburn said. “When I moved to Georgia from Indiana, I became a personal trainer. I was a sports performance trainer with girls. I knew these pro athletes and many of them were in the WNBA. Listening to their stories, it was very similar to mine. They dedicated their life to this career and for some of them it was just over. Just like the military, it was like, ‘thanks for your service — bye,’ and that was it.”

“For them, basketball kind of did them the same way,” she continued. “Some you could tell they could do so much more, but they didn’t know what to do because they only identified as basketball players. The fact that I was training young girls who wanted to play basketball — it literally broke my heart to think about the fact that some of these young girls may take this same journey and end up like these women I was meeting. So, it was like what can we do to make sure these girls understand this industry, not just the sport, so that they’re more prepared when they stop playing basketball.”

Milburn did just that by creating programs that surround young women with powerful mentors through Young Misses and the WPBA.

“It’s the mentoring component that’s missing on the girls’ side —  it’s there on the boys’ side,” she said. “What is there on the girls’ side is the neglect, unfairness, and the inequalities in the sport, but they don’t have mentors to guide them through it. That was the biggest part —  putting mentors around our girls. Statistically, little girls start losing their self-esteem at about 9 or 10 years old. We knew we had to get there at 9 or 10, [but] if we got there later, we had to be prepared to rebuild their self-esteem. We created programs that pour into them.”

“Another thing we’re big on is making sure they understand that they have their purpose that they’re born with, but their purpose is also to bring up the young girls behind them,” Milburn continued. “We’re not just mentoring them —  they’re mentoring the girls behind them. It gives them something else to look towards outside of their sports, college or whatever they want to do.”

Milburn created Young Misses (formerly Atlanta’s Young Misses) as a way to build the kind of programming she wanted to see for young women. Young Misses also offers young girls opportunities to learn the importance of giving back, and teaches them about business through fundraising and community outreach.

“We started out with about 10 girls, most of which are graduating with their bachelor’s or master’s now,” Milburn said. “We have another group of girls that are going to college this coming year. Young Misses isn’t just basketball, it’s all extracurricular activities. The goal is to put them in something. Studies show that girls who are involved in extracurricular activities [whether it be a sport or an instrument] are more likely to graduate[from] high school and go to college. We wanted to make sure we were introducing girls to an extracurricular activity and also making sure they had other options outside of sports.”

Although Milburn was never on any sports teams, her background as a sports performance trainer and love for giving back was the catalyst for creating the WPBA, which was founded at the height of the pandemic in 2020.

“We’re providing high level playing opportunities,” she said. “The majority of our players are former WNBA players, but there aren’t enough spaces for them. There are only 12 teams in the WNBA, that’s 144 women that can play in the pro league… there’s more than 144 women who can actually play at that level. We’re more grassroots and community based. We’re getting out there in the community. We want little girls in Philadelphia to look at the league and say this is owned by someone who looks like me. We want them to have these players in their face, to serve as mentors, community figures and role models. Athletes aren’t obligated to be role models… our athletes are. That’s what we’re working on now — our community presence before we even play a game.”

The WPBA is getting active in the Philadelphia community. The WPBA will partner with Paris Fit Studios for their 2nd Annual National Workout Day event on May 7.

“We want to bring more people out, especially kids,” Milburn said. “We want to talk about the positives of working out, showing kids and adults how to work out without equipment in your own home, give educational classes on nutrition and offer mental health resources. Everything we do in the community focuses on health and wellness.”

To support the efforts of The WPBA, be sure to visit their website at: www.thewpba.com and follow them on social media @The_WPBA. The Second Annual National Workout Day on The Square will take place on May 7 at Drexel Square (30th & Market) from 11:30 a.m. – 1 p.m. To find out more details and to register, visit: www.thewpba.com or www.getparisfit.com.