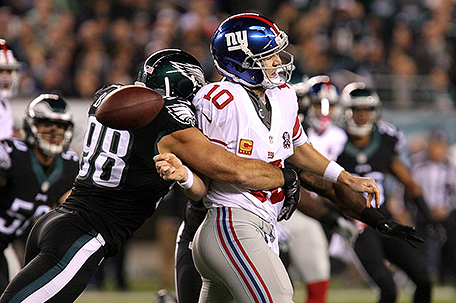 ABOVE PHOTO:  Eagles linebacker Connor Barwin gets one of his three sacks of Eli Manning in the Birds 27-0 win over the New York Giants at Lincoln Financial Field Sunday Night.  (Photo by Webster Riddick)

For The Chris Murray Report and the Philadelphia Sunday Sun

The New York Giants found out in their loss to the Eagles on Sunday that it’s much easier to talk trash and sell woof tickets. No matter how times you deface another team’s logo, backing it up on the field on gameday is a whole lot harder and the only thing that really matters.

The Eagles, especially the defense, did all the talking in a resounding 27-0 shutout victory over the Giants at Lincoln Financial Field.

Contrary to Giants defensive Jason Pierre-Paul’s contention that the Birds could easily be 0-5, the Eagles are 5-1 and tied with the Dallas Cowboys (5-1) for first place in the NFC East. New York is now 3-3.

For the first time this season, there was no need for a second-half comeback nor was there a frantic run of points by the other team to make the final score closer than the game itself. Going into the bye week, the Eagles wanted to come out and play a complete game where the outcome was never in doubt.

The Eagles defense dominated a hot Giants squad that came into the contest riding the wave of a three-game winning streak.

“That was the biggest thing we wanted to play straight quarter of clean football,” said Eagles safety Malcolm Jenkins. “When we got up, coming off of last week (against the St. Louis Rams) we wanted to finish the game the right way. I think all three phases did that.”

The key to the sacks was the tight coverage of the Giants receivers by the Eagles secondary that disrupted Manning’s timing and forced him to hang onto the ball longer than he wanted.

“Our secondary did a tremendous job jamming their receivers, giving them different looks because the last three weeks what we’ve seen on film is Eli catching the ball and throwing it,” Barwin said. “Today, he was catching the ball and getting to his second or third read and that’s how we were able to get pressure on him.”

After completing 70 percent of his passes last week against the Atlanta Falcons, Manning was 13-of-23 for 151 yards and zero touchdowns.

“(Eagles) did a good job,” Manning said. “They got good pressure and we didn’t win many one-on-one matchups. … They just had good coverage and I held the ball a little too long and I have to do a better job on some instances of getting the ball out and getting through my progressions a little quicker.”

Eagles cornerback Cary Williams said the goal of the secondary was to come out and establish a physical presence against the Giant’s receivers to help throw of Manning’s timing and allow the front seven the chance to attack the quarterback.

“We were able to get some hands on those guys and disrupt the timing,” Williams said. “The front seven did a tremendous job getting in those windows, putting their hands up and pressuring them and making the pocket muddy and he wasn’t getting too many lanes to throw in and that made our jobs easier.”

With the Giants best running back Rashad Jennings out with an MCL in his knee, New York could not muster a running game against the Birds defense. The Eagles held the Giants to just 85 yards rushing.

The finest moment of the game for the Eagles defense came in the third quarter. After intercepting a Nick Foles pass deep in Eagles territory, the Giants drove the ball down to the Eagles three-yard line and decided to go for it on fourth down and came up short when Manning’s pass sailed over Victor Cruz’s head.

Meanwhile, running back LeSean McCoy found his rushing mojo, gaining a-season high 149 yards rushing on 22 carries. Foles threw a pair of first- half touchdown passes to Zach Ertz and James Casey. He was 21-of-34 for 248 yards, but also threw a pair of interceptions.

Kicker Cody Parkey added a couple of field goals to give the Eagles a 20-0 lead at halftime.

Another Meadowlands miracle: The Eagles defense closes the show in win over the New York Giants