A Tale of Two Rookies 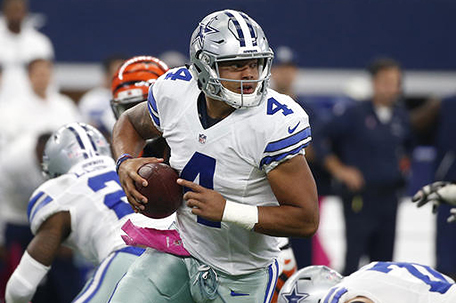 When the Philadelphia Eagles drafted Carson Wentz in the first round and the Dallas Cowboys selected Dak Prescott in the fourth round of the 2016 NFL Draft, most pro football observers thought that both rookies would have to spend time holding their team’s clipboards.

But a funny thing happened on their way to their apprenticeships.

Both Wentz and Prescott became starters. Granted, the circumstances that put them there were kind of strange, but hey.

Meanwhile Wentz was thrown to the wolves eight days prior to the start of the regular season when the Eagles traded Sam Bradford to the Minnesota Vikings who had lost their starter Teddy Bridgewater to a broken leg.

Usually, rookies struggle under such conditions.

Because of this, the two rookies will take the field for NBC’s Sunday Night Football broadcast to fight for control of the NFC East. The Cowboys are in first place at 5-1, with the Eagles nipping at their heels at 4-2.

“They know how to win. They know how to lead their teams. Nothing seems to be too big for either one of them,” said Eagles head coach Doug Pederson. “They take it in stride. The ability to protect the football through these first six, seven games has been crucial.”

One of the things that both Wentz and Prescott have in common is that they are both athletic, mobile quarterbacks that can make plays with their legs.  The work that both players have put in has paid off to the point that Prescott and Wentz have looked like poised NFL veterans.

“I think in our case, how well he [Wentz] prepares himself during the week, his leadership ability,” Pederson said.  “And all that is just taught at an early age and you kind of just have it, and some guys have it, some guys don’t. Both of these guys have it.”

Cowboys head coach Jason Garrett coached Wentz during the Senior Bowl and was high on him because of his work ethic and his football IQ. Even though he was the third-string quarterback, Prescott prepared for his moment on the stage.

“It’s starts with his preparation. He always ready,” Garrett said. “Always was able to handle the offense, call plays and handle himself at the line of scrimmage. You can tell he was prepared.” 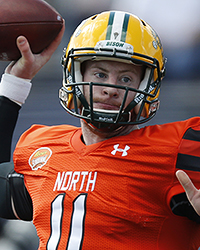 Prescott and Wentz met during last year’s Senior Bowl and again during the Scouting Combine. Both players praised each other for the success they’ve had so far.

“It’s exciting to see that he’s having been have some successes as well,” Wentz said. “It’s going to be fun to go see him play.”

Prescott said he’s not surprised at how well Wentz is performing as the Eagles starting quarterback because of his intelligence and his work ethic.

“He’s a smart guy, great player, a great athlete,” Prescott said. “He’s doing exactly what I thought he would do. I figured he’d be a good player in this league. He’s been doing well.”

In an age of trash talk and obnoxious self-promotion, both Prescott and Wentz are a breath of fresh air and are humble in their approach to Sunday’s game.  When a reporter asked Prescott about going up against Wentz, he quickly deflected the question to emphasize team.

A Tale Of Two Halves