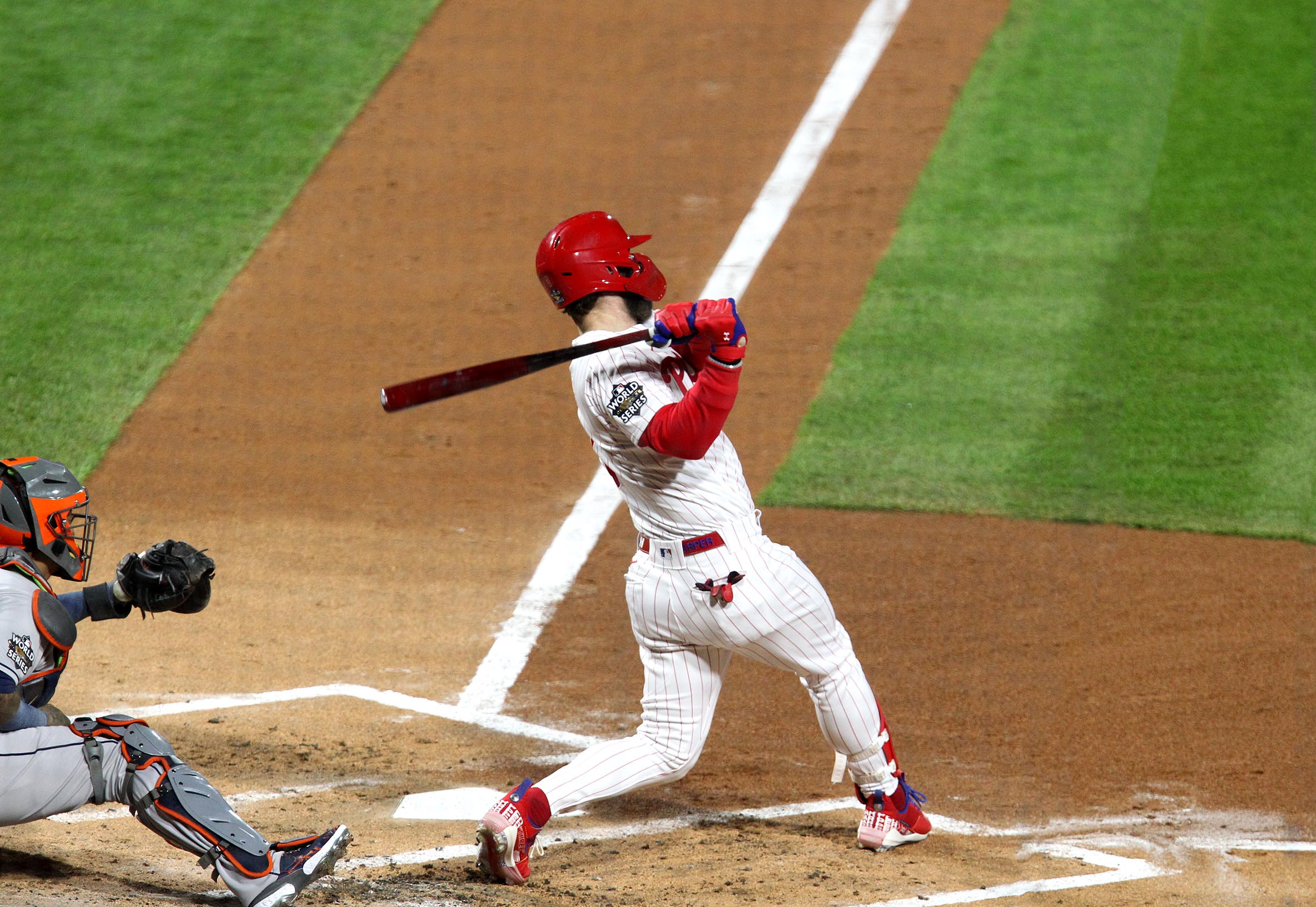 Using a combination of home runs, great pitching, and a serious home field advantage, the Philadelphia Phillies took a 2-1 lead in the best-of-seven World Series at Citizens Bank Park.

Above photo: Bryce Harper hits one of a succession of home runs leading to an incredible Phillies’ win against the Astros.

With a raucous crowd of 45,712 red-towel waving fans behind them at Citizens Bank Park, the Philadelphia Phillies took a 2-1 lead in the 2022 World Series, thanks to their favorite, most trusted weapon — the long ball.

And they hit a lot of them.

In the Phillies’ 7-0 shutout win over the Houston Astros, they hit a World Series record-tying five home runs, putting the team two games away from its World Series championship since 2008.

“Obviously, we swung the bats well tonight, got some pitches to hit and capitalized,” he said. “I thought Ranger really threw the ball well. He was really strong, good sinker, all his secondary pitches were good. He got a lot of soft contact.”

The same could not be said for Astros starter Lance McCullers. The Phillies jumped on him in the bottom of the first inning with a two-run homer by designated hitter Bryce Harper to give the Phils a 2-0 lead.

“I think is such a momentum swing for us just for the pure fact of our fan base,” Harper said.  “We all come in here and we’re ready to go and we’re excited to get on the field because we know they’re going to show up and there’s going to be 46,0000 people here screaming and yelling and going crazy.”

Home Run Derby with a pair of solo home runs to increase the lead to 4-0.  In the Phillies half of the sixth inning, a Kyle Schwarber two-run homer and a solo shot by first baseman Rhys Hoskins ended the competitive portion of the game.

Meanwhile, Phillies pitcher Ranger Suarez, pitching in his first World Series game as a starter, had a solid outing and wasn’t fazed at the magnitude of the game.  In five innings on the

mound, Suarez, who got his second win in the postseason, allowed zero runs on just three hits. He also had three strikeouts and just one walk.

Suarez said he fed off the energy of his teammates knocking the ball out of the park.

“The five homers were wonderful,” Suarez said through Phillies team interpreter Diego Ettedgui. “When you got that run support, it’s much better, it gives you more confidence on the mound. It allows you to do more stuff on the mound.”

Thomson said what really has impressed him about Suarez is his confidence and calm demeanor in big-game situations.

“Yeah, I mean, truthfully, it doesn’t really surprise me because I know the heartbeat that doesn’t change at all,” Thomson said. “Doesn’t matter what scenario we’re in. I know the stuff. He’s just, he competes. He’s very calm.”

He might want to share his secrets with fellow starter Aaron Nola before he takes the mound at Citizens Bank Park for Game Four tonight. Nola is coming off of a less than stellar outing in Game Two but will have the CBP faithful behind him. First pitch is at 8:03 p.m.. You can catch the game on Fox 29 starting at 7 p.m. with the pregame show.