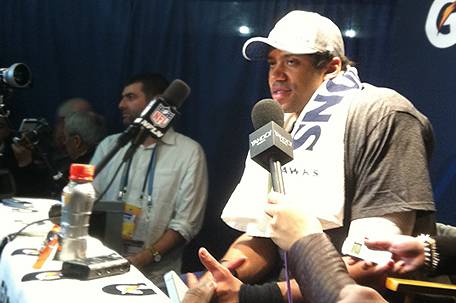 EAST RUTHERFORD, N.J.—With the Seattle Seahawks 43-8 thrashing of  the Denver Broncos in Super Bowl XLVIII, the talk in social media, sports-talk radio and the various 24-hour cable sports networks has centered around the legacy of Broncos quarterback Peyton Manning.

The current narrative among sports fans these days is that the more championship rings you have the greater you are as a player.  Of course, you will have someone saying the Manning’s greatness is now diminished because he didn’t get that second Super Bowl ring.

Of course, whenever I am in these discussions on social media or even sports-talk radio, I often point out the absolute silliness of that notion in team sports because it takes more than one player to win.

Pointing out to sports fans that it take a team to win a championship is the equivalent of your mother telling you to eat your nasty-tasting vegetables because it’s good for you.

I think the popularity of this notion in the current era comes from one Michael Jordan who helped to lead the Chicago Bulls to six NBA championships. Never mind that he had help from teammates like Scottie Pippen and Dennis Rodman, Jordan is the face of those championships.

That mindset has invaded football, the ultimate team sport and this is the stuff you see in the ongoing vilification of Manning after losing to Seattle.  The former Tennessee star has one Super Bowl ring, but it’s never enough for the limited, narrow scope of fans who are bedazzled by the glow of the ring or the trophy.

What they often fail to understand or maybe they don’t want to understand is the collective effort that it takes to get to win that championship.

There are a lot of great players in football who never won or even played in a championship game. Yet, in the eyes of various sports media types, the jockocracy, and fans, not winning a title somehow takes away from a player’s greatness.

During this past Super Bowl Week, I asked some prominent members of the Pro Football Hall of Fame if it was fair to tie a player’s greatness to the amount of championship rings he has or the  lack thereof.

“I would have to say that it is because that’s what this game is,” said Hall of Fame wide receiver Michael Irvin, who helped lead the Cowboys to three Super Bowl crowns during the 1990s. “I don’t care how great you play individually if you can’t get others to play great we gotta to measure you on that. We can’t call this the ultimate team sport, but give you accolades for individual success.”

Then I asked Irvin what about guys like Dan Marino, Don Fouts or Barry Sanders? Those guys were Hall-of-Fame players who never won a championship. Surely their greatness is not diminished by their lack of rings, right?

“A Tom Brady couldn’t play defense, but can Tom Brady get a little more out of the guys that are playing defense? Is Tom Brady reaching and associating with guys in a way that brings more out of them?” Irvin asked rhetorically.

Cris Carter, a 2013 Hall of Fame inductee and an outstanding receiver for the Minnesota Vikings begged to differ with Irvin on that one. He said the notion of a great career being diminished because of lack of a Super Bowl ring is something created by the media.

“When you play certain positions you don’t have that much of an impact on who’s gonna win or lose the game,” Carter said. “Ninety-seven percent of players that play in the NFL don’t even play in a Super Bowl, 97 percent. So to think that you have to win a Super Bowl to be in the Hall of Fame wouldn’t be fair.”

Carter said it’s easy for Irvin to say championships define greatness because he played on a Cowboys team that had Troy Aikman, Emmitt Smith and Larry Allen—all of whom are Hall of Famers.

Former New England Patriots linebacker and ESPN football analyst Tedy Bruschi was a part of three Super Bowl winners. I thought he would share Irvin’s sentiment, but he didn’t.

“Championships define greatness of teams that’s the way it is,” Bruschi said. “I don’t need Cris Carter to have a championship ring to know how great he is.  He’s one of the greatest of all time.”

As fans we have a weird kind of Drum Major Instinct when it comes to our athletes because we all like the glitz and the glamour of the guy who stands out in the cr owd. In football and for that matter any sport, the guy who stands out does so because he stands on the shoulders of the teammates who are holding him up.

We would like to thank all our Chris Murray Report at the Super Bowl Sponsors: