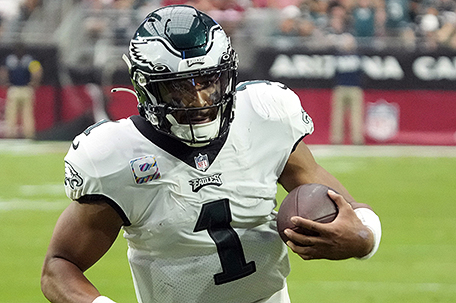 The Philadelphia Eagles managed to stay unbeaten against the Arizona Cardinals last Sunday, but their game against the Dallas Cowboys this Sunday night is going to be the bigger test.

ABOVE PHOTO: Philadelphia Eagles quarterback Jalen Hurts (1) during the first half of an NFL football game against the Arizona Cardinals, Sunday, Oct. 9, 2022, in Glendale, Ariz. (AP Photo/Rick Scuteri)

Were it not for the fact that the Philadelphia Phillies are making a playoff run that has excited the city, the talk of the town would be about this week’s matchup between the Philadelphia Eagles and the Dallas Cowboys.

On Sunday night, the 4-1 Cowboys come into Lincoln Financial Field to try and be the first team to beat the 5-0 Eagles, the NFL’s lone undefeated team.

While reports coming out of Dallas suggest that starting quarterback Dak Prescot, who is still healing from a broken bone in his right hand, is unlikely to start Sunday night’s game at Lincoln Field, Eagles defensive coordinator Jonathan Gannon said he doesn’t see much different Prescott and current Cowboys starter Cooper Rush, especially in terms of their mobility.

“Both of them when they need to move, they move,” Gannon said. “When they need to make off-schedule plays, they both can do that, and Cooper has shown that he can do that. He’s got a good feel in the pocket when it starts to collapse a little bit. He knows where to find that rush lane and step up and throw it.”

So far, the Eagles have been able to thrive on the efficiency of quarterback Jalen Hurts who completed 26 of 36 passes for 239 yards while rushing for 61 yards and two touchdowns in the team’s 20-17 victory over the Arizona Cardinals. As a team, the Eagles rushed 139 yards. The Eagles’ final 17-play, 70-yard scoring drive was mostly driven by the ground game with some key third-down passes thrown in.

“One of the things that makes Jalen Hurts a really good quarterback is the ability that he has to throw the ball, read defenses, and has the ability to move around and make plays,” Sirianni said. “Jalen has a huge, huge influence on the backside of the run game because of his ability to run the ball.”

Hurts credited his offensive line, which was missing Isaac Semaulo and Jordan Mailata, for physically controlling the line of scrimmage.

“I draw a lot of respect towards that group we have because they work their tails off and they’re coached by the greatest offensive line coach ever,” he said. “Regardless of the pieces that go in and out, it’s interchangeable and they worked their tails off. Jack Driscoll, Sua Opeta  … It’s a great example of accountability and people being ready when their number is called.”

The offensive line is going to get its toughest challenge yet in controlling a Cowboys defense, led by defensive end Micah Parsons, that has been wreaking havoc on opposing offenses.

In the Cowboys’ 22-10 win over the defending Super Bowl champion Los Angeles Rams, they sacked Matthew Stafford five times and forced three turnovers including a 19-yard fumble return for a touchdown by DeMarcus Lawrence. Parsons had two sacks and a tackle for loss.

“They put guys in different spots,” said Eagles offensive coordinator Shane Steichen. “Lawrence is a heck of a pass rusher. “It’s a really good defense we’re facing. They’re very sound in what they do. They play hard. They’re physical. It’s going to be a heck of a challenge.”

But while the Eagles have managed to maintain their unbeaten record through a lot of hard work and dedication, Lady Luck has also shined on them. A 23-yard field goal by Cameron Dickler, who was signed earlier last week due to the ankle injury suffered by Jake Elliot in the Jacksonville Jaguars game, turned out to be the winning score with 1:45 left in the game.

That’s because Cardinals place-kicker Matt Amendola missed a 43-yard field goal with 22 seconds left, something that might not have happened if Cardinals quarterback Kyler Murray wouldn’t have been a yard short when he ran the ball on second and 10.

Murray didn’t realize he was short, spiked the ball on third down to set up what was supposed to be the game-tying field goal, and the ill-fated kick was the result.

If you want to see how the Eagles fare against the Cowboys on Sunday night, you can catch the game on NBC-10 beginning at 8:30 p.m.