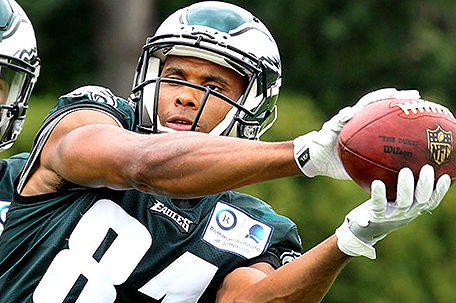 While on its face, the trade that sent former Philadelphia Eagles wide receiver Jordan Matthews to the Buffalo Bills doesn’t make a lot of sense, a look at rookie Mack Hollins sharpens the focus.

The more I think about the Philadelphia Eagles trading wide receiver Jordan Matthews to the Buffalo Bills for cornerback Ron Darby, the more it makes a lot of sense.

But it’s not for the reason that you might think, which is the fact that the Eagles are in desperate need of help at the cornerback position. While that’s true, and while Darby has shown that he’s overcome the struggles he had in Buffalo last year in practice at least, that’s not why the Matthews trade looks like a good deal to me.

It’s also not because Nelson Agholor is, at long last, playing like a number one draft pick. Sure, the former University of Southern California star has impressed the coaches during spring minicamps and in training camp, but until he shows that he can catch a ball consistently in a game-day situation, I’m not sold.

The reason why I think that trading Matthews made sense was because of the vast potential of rookie wide-receiver Mack Hollins and I’m guessing that he’s why Howie Roseman, the Eagles vice president of football operations, felt comfortable making the move.

You got a glimpse of Hollins’ talent in the first preseason game last week against the Green Bay Packers. He caught four passes for 64 yards and one touchdown and fans are probably still salivating over the speed and physical strength the 6-4, 221-pound former North Carolina star used to stiff arm and knock down two Green Bay defensive backs.

Granted, Hollins is not ready to usurp Alshon Jeffrey or Torrey Smith as a starter just yet. But you can definitely see he has the talent to be a number one or two receiver in the long run.

“One thing you see from Mack, he’s a hands catcher. Catches the ball out in front of his body. Then after that, it was just a great, physical run,” Pederson said. “He had the nice stiff arm to get in the end zone. That’s good to see from a young player first game out.”

Hollins’s place on the Eagles final roster is probably secure because he’s a gunner on the Eagles punt team, something he excelled in at the collegiate level. But he’s going to get plenty of opportunities both as an outside receiver and in the slot with the departure of Matthews.

“I think Mack can fill that role in some other spots and we’ll see who else can step up in that role,” said Eagles offensive coordinator Frank Reich.

Hollins said he has no problems playing on the outside or in the slot and that he’s going to work at learning every aspect of the receiver position.

“As a receiver, especially here, Coach (Al) Groh (Eagles wide receiver coach) said be versatile, be good at every spot we put you in because that might be your opportunity,” Hollins said. “Obviously I work more on the outside than slot, but we get opportunities to work in the slot in one-on-ones and team type stuff. You can always develop as a slot receiver.”

What makes Hollins such a dangerous, more versatile receiver is not only his height but has good hands and has the speed and separation skills to stretch defenses. During his collegiate career at North Carolina, Hollins averaged 20 yards per catch and scored 20 touchdowns in his three-year career.

The one thing that you have to like about his chances to crack the Eagles starting lineup is hunger. This was a guy who was a walk-on at North Carolina and eventually became a starter on both offense and special teams. A walk-on progressing to the starting lineup is no easy feat.  That’s something that requires a lot of work.

Hollins said while he was excited about his efforts in Green Bay, he said he still has a lot of work to do, starting with Thursday’s preseason game against the Buffalo Bills.

“I’m just going to keep doing what I’m doing, playing as hard as I can in practice—trying to make plays and wherever I end up is where I end up,” Hollins said. “It’s not going to stop working.”