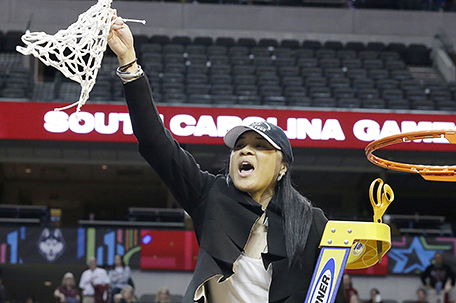 ABOVE PHOTO:  South Carolina coach Dawn Staley cuts down the net as she and the team celebrate their win over Mississippi State in the final of NCAA women’s Final Four college basketball tournament, Sunday, April 2, 2017, in Dallas. South Carolina won 67-55. (AP Photo/LM Otero)

As the seconds ticked down on South Carolina’s national championship win over Mississippi State, I told my friends and followers on Facebook that if Philadelphia basketball had a Mount Rushmore, you’d have to carve Dawn Staley’s image into that mountain.

Now we could debate all you want about who else would be up there and with choices like Allen Iverson, Wilt Chamberlain, Julius Erving, Moses Malone, and Earl “The Pearl” Monroe, you couldn’t go wrong in any direction.

But no matter who else you pick, Staley’s got to be there for a whole host of reasons.

Before her Gamecocks even took the floor for the National Championship, Staley had already carved her own niche in the National Basketball Hall of Fame as both a coach and a player.

In leading the Gamecocks to the 2017 national championship, Staley became the second African-American head coach to win an NCAA women’s championship. The first was Carolyn Peck, who led Purdue to the title in 1999.

Peck gave Staley a piece of the net from her team’s championship to hang on to until she got her own.

“She told me to keep it. I’ve had it in my wallet for years. she said,’When you win your national championship, just return it,’” Staley said. “I do have to give a shout out to Carolyn Peck, and I will return her net, thankfully.”

Staley’s path to greatness as a Philadelphia basketball icon was forged on the playgrounds of North Philadelphia where she developed her basketball skills playing against the likes of Bo Kimble and the late Hank Gathers, who were both legendary collegiate stars at Loyola Marymount (California). She was a high-recruited star at Muriel Dobbins Tech.

During her collegiate days at the University of Virginia, Staley led the Cavaliers to the Final Four three times. In her senior year, Staley became the first and only player in the history of college basketball to be the Most Outstanding Player of the Final Four despite not being on the championship team.

As a collegiate head coach, Staley put the Temple University women’s basketball program on the map by leading the Owls to six NCAA tournaments while winning four Atlantic-10 titles.

“I never wanted to be a coach,” she said during her post-game press conference on Sunday. “I never wanted to, you know, be sitting where I’m sitting. Dave O’Brien, the late Dave O’Brien, the athletic director at Temple University, saw something in me that I didn’t see in myself. He asked me to come and be a part of changing the program at Temple.”

“From then on, I really can’t see myself doing anything other than what I’m doing, impacting the lives of young people, and also being able to check this box off in my career,” Staley continued. “I’m really grateful and thankful that he made this possible.”

During her time at Temple, Staley was spending her collegiate offseason playing in the WNBA. By the time her career as one of the top 15 players in WNBA history. She won three Olympic gold medals as a player.

But for all of Staley’s accolades as a player and a coach, the one thing that eluded her was an NCAA title. During his career as a player, she experienced some heartbreaking losses in those Final Fours including a heartbreaking overtime loss to Tennessee in 1991. She never thought she would get there after her collegiate career was over.

Coming into the 2017 women’s tournament, it was all but a forgone conclusion that Connecticut was going to win another national championship. But Mississippi State upset UConn in the National Semifinals and ended the Huskies 111-game winning streak.  The path to the national title was up for grabs and Staley’s team seized the opportunity.

For Staley, it was indeed a dream come true.

“When I couldn’t get it done in college, I thought that was it,” Staley said. “I never gave up on winning a national championship, no matter how hard it was, no matter what it looked like. I’m just so happy that I get a chance to share it with so many different people in my coaching, basketball family tree. Coaches, former players, mentors, everybody, everybody.”

Staley’s national title was merely the cherry on top of a career that has made her an icon in Philadelphia basketball.