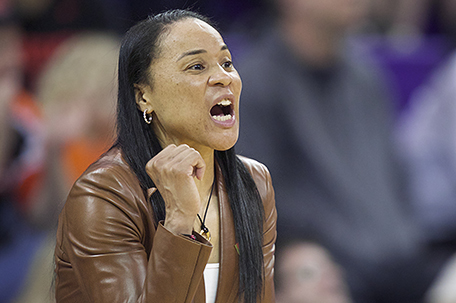 ABOVE PHOTO:  South Carolina head coach Dawn Staley yells to her team during the first half of a second-round game against Oregon State in the NCAA women’s college basketball tournament Tuesday, March 25, 2014, in Seattle. (AP Photo/Stephen Brashear)

When we think of iconic figures in Philadelphia basketball, we almost always point to male basketball players like Wilt Chamberlain, Julius Erving and Allen Iverson, three guys that would be atop a roundball Mount Rushmore if it existed here.

But, there’s one more person you need to add to that list of Philadelphia basketball royalty and her name is Dawn Staley.

Staley, who will be taking her University of South Carolina women’s basketball squad to the Women’s Final Four in Tampa, Florida, has done just about everything in basketball and is just as worthy as her legendary male counterparts.

When Staley’s South Carolina women’s squad takes the floor against Notre Dame in Tampa, it’ll be her first trip to the national semifinals as a head coach and her first visit since her collegiate days when she was leading the Virginia Cavaliers to three straight Final Four appearances.

Transforming a once dormant Gamecocks women’s basketball program into a national powerhouse is a testament to her North Philly roots and a rock-hard determination to succeed in the face of enormous odds, something she reflected on during a conference call with Final Four coaches earlier this week.

“I’m most proud of being able to cut the bottom of a milk crate out, nail it to a piece of wood, and put it on that electrical pole,” said Staley, a three-time Olympic Gold Medalist. “And I used to really   I perfected a bank shot off of a wooden basket in a crate.

“So I know I’ve accomplished a lot of things in my life and my basketball career, but that’s truly hard.  I won a lot of horse games on the streets of Philly learning how to perfect the bank shot under those circumstances.”

It was that competitive fire that helped her turn a struggling Temple’s women’s basketball program into a force to be reckoned with in the Atlantic-10.  From 2000 to 2008, Staley’s teams won 172 games and captured four A-10 titles and made six NCAA Tournament appearances.

Quite a few of her players from those Owls teams have gone to play well at the professional level in this country and internationally. Most notably, Candice Dupree who helped lead the Phoenix Mercury to a WNBA title.

Coming to South Carolina and coaching in a tough Southeastern Conference that includes perennial powerhouse Tennessee, winners of seven national championships, was an even tougher task for Staley than reviving Temple’s program.

But Staley said it wasn’t easy. She needed to get talent good enough to make South Carolina into a national powerhouse.  Some of that talent is homegrown from the state of South Carolina.

“It takes talent.  It takes great people, and it takes a commitment, a commitment of discipline,” Staley said.  “So once we got those things in place, our program started to move in the right direction.  We didn’t always have that.  Seven years ago, we didn’t have that.”

For all the times Staley has been a part of winning traditions as both a player and a coach at the collegiate level, she has yet to win a national championship. As a player, she came close in 1991 when her Virginia squad he experienced a heartbreaking overtime loss to Tennessee.

Staley said if South Carolina wins the  women’s national championship this weekend, the trophy is not just for her, but for all the people who shaped her playing and coaching career along the way including former Temple head coach John Chaney.