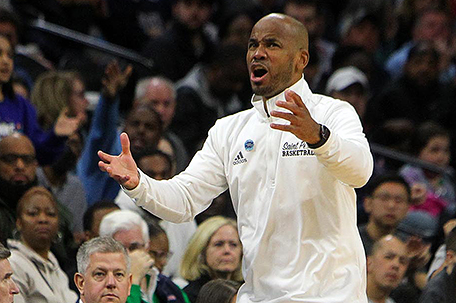 Peacocks had the greatest run in the NCAA Tournament for a 15-seed.

In their first three games of the 2022 NCAA Tournament, the St. Peter’s Peacocks gave us a stirring reminder of why even people who aren’t college basketball fans fill out their brackets by the millions.

The 15th-seeded Peacocks reached the Elite Eight by chopping down college basketball giants — Kentucky, Murray State, and Purdue. The team played in a gym that holds just 3,000 with a bunch of unrecruited no-name kids who shook up the college basketball world with their incredible run through the tournament.

Unfortunately, St. Peter’s ran into an extremely talented North Carolina (28-9) squad as the greatest run by a lower seed came to an end in front of a sellout crowd of 20, 235 fans on Sunday at a Wells Fargo Center that adopted them as a “home” team.

North Carolina cruised to a 69-49 victory over St. Peter’s to capture the East Regional title and advance to their 21st trip to the Final Four. The Peacocks ended their improbable run through the tournament with a 22-11 record.

They played with house money, and made the most of it, head coach Shaheen Holloway said.

“That a group of guys came in here no one gave a chance to, no one believed in, but the people in our locker room that’s in our program, administration, us, and made history,” he said. “They shocked the world.”

“We’re obviously emotional at first, because we’re all competitors,” said St. Peter’s guard Daryl Banks III, who was one of St. Peter’s players to make the All-East Regional team. “We expected to win the game. It didn’t go our way, though. But Coach preached we should all keep our head high because what we did is something that no one’s ever done before. So, we’re going to walk out of here with our head high.”

Though no one from St. Peter’s wanted their season to end in defeat, there was no reason for them to hang their heads in despair. A no.15 seed getting to the Elite Eight, one step away from the Final Four, was still the greatest run for a team seeded so low.

When the Peacocks starters gathered together near their bench for a final huddle in the game’s final minutes, senior forward KC Ndefo said his teammates reminded each other to be proud of their experience in the tournament.

“We just told each other to say together. What we did was amazing. And it was a brotherhood,” Ndefo said. “Words can’t describe what we did. Just to be happy for each other. For us to be the only team to do this, it’s just historical. We’re blessed for this.”

The Tar Heels will face their Atlantic Coast Conference-rival Duke Blue Devils in the national semifinals at the Caesars Superdome in New Orleans. It will be the third meeting between the two teams. It will be the last Final Four for Duke head coach Mike Krzyzewski, who will retire at the end of the Blue Devils run through the Tournament.

For a game Peacocks squad, North Carolina’s talent was simply too much to overcome. To make things worse for St. Peter’s, they struggled offensively and found themselves in an early from which they would not recover. The shots that fell for them in previous rounds of the tournament just didn’t go through the hoop.

“When you take bad shots, especially shots that I didn’t know that one of the guys was going to take, right?”  Holloway said after the game. “And the next thing we know, it’s 6-zip, 9-2. Those are momentum swings.”

St. Peter’s had no answer for North Carolina’s front line of Armando Bacot, who scored 20 points, and Brady Manek, who scored 19 points. Bacot was named the Most Outstanding Player of the East Regional.

North Carolina held St. Peter’s to just 30 percent shooting. The Peacocks didn’t fare much better from behind the three-point arc.  They were 4-of-16 from the three-point range.

“I didn’t really recognize my team the first ten minutes of the game,” said Holloway. “I thought we came out a little slow, a little timid. Give those guys credit — they came in and jumped on us early.”

But despite the hard end to their season at the hands of Tar Heels, Holloway said St. Peter’s run through the tournament, knocking down high-profile programs, will be something that his players, the university, and the state of New Jersey will never forget.

“You’ve got guys  that’s going to be remembered for things that they could tell their kids and grandkids,” Holloway said. “It’s a story within a story. I’m super proud of these guys. They came in and made history. Point-blank, period. … Saint Peter’s made it to the Elite Eight. Great story. You guys write about it.”

The Final Four begins on Saturday at 6 p.m. on TBS.