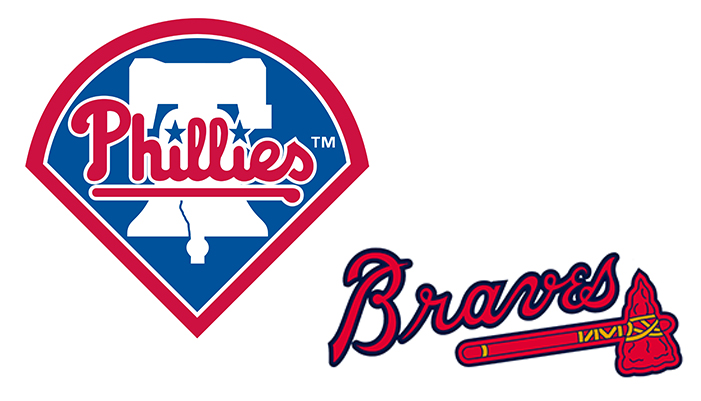 The 2-2 split with the Atlanta Braves keeps the Phillies in the playoff hunt.

After losing four of their last five games coming into Sunday’s series finale against the Atlanta Braves, Philadelphia Phillies manager Joe Girardi needed to get a solid effort from a starting pitcher to keep the team from falling further behind the first-place New York Mets.

Less than 24 hours after the Phillies took a 15-1 shellacking from the Braves, pitcher Aaron Nola quieted Atlanta’s bats for eight and two-thirds inning, the lone hiccup being a solo homerun by Braves third-baseman Austin Riley in the top of the 9th inning.

Thanks to closer Ranger Suarez who got the save, as the Phillies (49-49) held on to a 2-1 win over the Braves at Citizens Bank Park. The win not only moves the Phils back to .500 but also keeps them four games behind the Mets in the American League.

In what was his best outing in an up and down year, Nola did an effective job of mixing his pitches off his fastball, keeping Atlanta hitters off-balance and off the scoreboard for much of the game. Nola struck out nine and allowed just four hits on 116 pitches in what was nearly a complete-game shutout.

“I actually felt the best I have all year,” Nola said. “I was more in sync with everything, and it was a big win coming off (Saturday), especially against the Braves because we know what they can do. We go back to them in September because we have to get as many wins as we can.”

Girardi said Nola’s performance was a much-needed boost for a Phillies squad that is still in contention for a division title with the trade deadline five days away.

“(Nola) was outstanding again today. Riley was the only trouble today. But everything was good, and it starts with the location of his fastball,” Girardi said. “That’s why I think it was really important that we got to split it. I mean we got to try to keep pace, and we got to make up some ground so anytime you know you can, you know you want to win series, but to lose it 1-3 It would have been really tough.”

Meanwhile on the offensive end of things, second baseman Jean Segura and Ronald Torreyes supplied the offense with a pair of home runs. Segura was also solid in the field, robbing the Braves of hits that stopped some potential rallies.  As it turned out, Torreyes solo shot to the left field seats in the eighth turned out to be the game-winner.

“He does such a good job of getting the barrel of the bat to the ball,” Girardid said. “Consistent playing time has really helped him. That’s a huge hit in the eighth inning. That’s the difference in the game along with some of the plays that (Segura) made (in the field).”

Since July 10, Torreyes has been on a tear, he is batting .417 with two doubles, two home runs, eight runs batted with eight walks. He has a 1.027 OPS (on-base and slugging percentage). Girardi didn’t say he would consider starting him at third base, but he’s going to use Torreyes in the infield as much as he can.

The Phillies will start a four-game series against the Washington Nationals Monday at Citizens Bank Park.