So much for that… 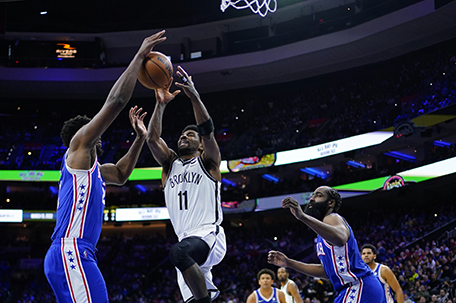 ABOVE PHOTO: Brooklyn Nets’ Kyrie Irving, center, goes up for a rebound against Philadelphia 76ers’ Joel Embiid, left, during the second half of an NBA basketball game, Thursday, March 10, 2022, in Philadelphia. (AP Photo/Matt Slocum)

Not only did Thursday night’s drubbing by the Brooklyn Nets end in a “victory” for former point guard Ben Simmons, it also showed just how much the Philadelphia 76ers gave up in pursuit of James Harden…and how it could hurt them in the playoffs.

Well, for all the hype about Philadelphia 76ers fans booing Ben Simmons while sitting on the Brooklyn Nets bench at the Wells Fargo Center, you did hear a lot of booing … at their own team.

Brooklyn’s emphatic 129-100 smackdown of the 76ers Thursday was a stark reminder that the road to the NBA’s Eastern Conference title is not going to be an easy one even with a superstar point guard like James Harden.

“It was a little bit of everything,” Harden said after the game. “We just didn’t have the pop that we needed. We turned the ball over too much which gave them a lot of points. Not even contested points, just easy layups, threes, and dunks.

“They made some tough shots early which we expected,” Harden added. Offensively, the last five games, we’ve been playing well. The ball’s been moving. Tonight, it didn’t as we needed it to. The combination of not making shots and the ball not moving helped the (Nets) offensively.”

The Nets, led by the trio of Kevin Durant, Kyrie Irving, and former Sixer Seth Curry, dominated the Sixers early and often to end the competitive portion of the game midway through the third quarter.  At that point, Brooklyn had a 29-point lead and those Sixers fans who booed Simmons earlier in the evening turned their ire to their own team.

“What you want to do is play well at home and have your home-crowd cheering for you,” said Sixers head Glenn “Doc” Rivers. “We didn’t play well enough to get that done. That’s what we missed tonight and that’s on us.”

In a nationally televised marquee matchup of two Eastern Conference contenders, the Sixers came up woefully short and couldn’t get anything going. Harden looked every bit like the guy that fans say vanishes in big-game situations like the playoffs. He scored just 11 points on 3-of-17 shooting.

But Hardin wasn’t the only Sixer who had a bad night. Tyrese Maxey couldn’t get his game going and scored just four points on 2-of-7 shooting.  While Joel Embiid led all Sixers with 27 points, most of his points came from sinking 15-of-19 shots from the free-throw line. He hit 5-of-17 shots from the field.

And as much as fans were disappointed at the Sixers taking a butt-whupping, as they did as their old teammate Simmons watched along sidelines, you have to remember that this is one game. It’s one regular-season game and not some sort of prelude to the playoffs.

During his postgame press conference, Rivers made it a point to say that the loss wasn’t a statement for the Nets except to say that Brooklyn played better on this one night and that his Sixers team has to get better moving forward.

“If it was (a message), it wasn’t delivered,” Rivers said when a reporter asked him if the Nets were sending a message to the Sixers. “What does that mean? That means nothing. They did say they were the more physical team right now just by the way they played. I don’t know if that was a message but that was a fact tonight and we have to come to grips with that.”

The loss to the Nets was not the end of the world. The Sixers are still good enough to beat any team in the Eastern Conference in a seven-game series. Before the All-Star Break and before Hardin was in the team’s lineup, the Sixers suffered a huge blowout loss to the Boston Celtics and they came back a couple of days later to beat the defending NBA champion Milwaukee Bucks.

The smack down by the Nets was a good glimpse of how the Sixers need to raise their level of play to face the gauntlet of tough teams in the NBA’s Eastern Conference.