So Close…And Yet So Far… 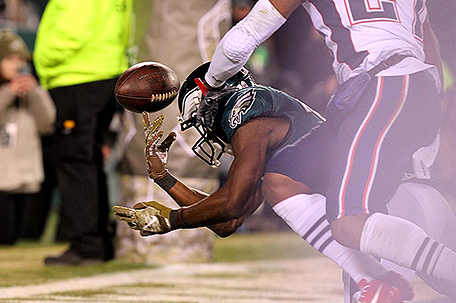 The Philadelphia Eagles had the New England Patriots right where they wanted them on Sunday. But a lackluster offense kept them from closing the deal.

You would think that a lackluster performance by Tom Brady and the New England Patriots offense would translate into a victory for the Philadelphia Eagles.

But while Brady wasn’t shocking the world on Sunday, the Patriots left Lincoln Financial Field with a 17-10 win. And because of an injury-riddled Eagles offense that couldn’t seem to support the outstanding effort of the team’s defense, the game wasn’t even as close as the score would make you think it was.

“We didn’t make enough plays,” Eagles coach Doug Pederson said. “I thought the defense really kept us in this football game for the most part.  Offensively, we failed to execute.”

As much as head coach Pederson and the Eagles players like to talk about having a “the next man” up mentality, not having players like wide receivers like Alshon Jeffery and DeSean Jackson and running backs Jordan Howard and Darren Sproles really hindered what the offense could do.

Things got even worse for the offense when right tackle Lane Johnson left the game early in the second quarter with a head injury.

For the game, the Eagles had just 255 yards of total offense. They were 3-of-13 on third-down conversions and crossed mid-field just once in the second half and that didn’t even happen until late in the fourth quarter. In the third quarter, the Birds generated just 14 yards of offense with two first downs and no third down conversions.

“We definitely struggled and honestly, that loss is on us as an offense,” right guard Brandon Brooks said. “We didn’t execute and we didn’t go out there and do anything we were supposed to do. We started out fast and hot, but we have to be consistent and we have to sustain it.”

Meanwhile, quarterback Carson Wentz was sacked five times for 40 yards including a fumble that set the Patriots up deep in Eagles territory and eventually led to a field goal.

The Eagles jumped out to a 10-0 lead on the Patriots on a 42-yard field goal by Jake Elliott on the game’s first possession and five-yard touchdown pass from Wentz to tight end Dallas Goedert that was originally ruled an interception by Patriots safety James Jones, who snatched the ball out of Goedert’s hand.  But the replay official ruled that Goedert had already crossed the end zone before Jones snatched the ball away.

And that was it for the Birds offense for the rest of the game.

The Patriots would the score the game’s final 17 points, but the Birds defense didn’t make it easy for Brady and company.

Though he was sacked just once, the Eagles defense kept Brady off balance and never allowed him to be comfortable in the pocket.  Brady completed 26-of-47 passes for 216 yards. He finished the game with a 67. 3 quarterback rating, a far cry from the 505 yards he compiled in a losing effort in Super Bowl LII.  The Eagles defense held the Patriots offense, which averages 366 yards per game, to just 298.

“The biggest things for us, I think we did a good job of getting him off of his spot, making him run around and throw the football,” defensive tackle Fletcher Cox said.

It took a trick play by the Patriots on their first possession in the third quarter to score their only touchdown of the game when Brady lateraled the ball to wide receiver Julian Edelman who then threw a 15-yard TD pass to fellow wideout Phillip Dorsett II.  Prior to that, the Eagles defense had held the Patriots to three field goals.

With Russell Wilson and the high-powered  Seattle Seahawks offense  coming to Lincoln Financial Field this coming Sunday, Eagles safety Rodney McLeod said the performance of an Eagles defense that has not allowed more than 21 points in a game over the last defense is something the team can hang its hats on moving forward.

“I think the defense is turning in the right direction. We’re playing like ourselves,” said McLeod said. “We needed to create more turnovers to help the offense get the ball back to them and put them into better field position. Outside of that, I’m pretty confident, looking forward to playing Seattle. They’re a tough opponent and we need a win.”

That game kicks off at Sunday at 1pm and can be seen on Fox-29.