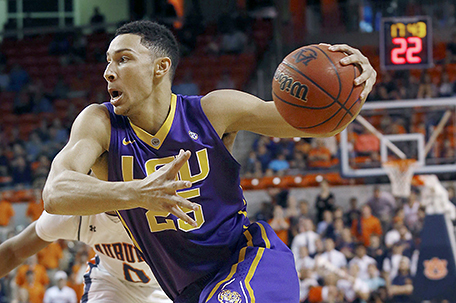 Unless several published reports are seriously wrong, the Philadelphia 76ers have selected former LSU star Ben Simmons as their Number 1 pick in the 2016 NBA Draft.

Cleveland.com and ESPN.com both reported this week that Sixers management told Simmons that they were going to take him as the first pick in Thursday night’s NBA Draft. It was also rumored that the Sixers were working on a trade that would send center Jahlil Okafor to the Boston Celtics for the third pick.

The Sixers would probably use that pick to get Providence point guard Kris Dunn. If they could pull that off, they will definitely give Philly’s long-suffering NBA fans something to look forward to for the 2016-2017 season.

That would be a good thing after all the years of tanking and 10-72 seasons.

The fact that the 76ers would be considering those kinds of moves suggests to me that the organization wants to give their fans a reason to start cheering again.

So 20 years after the selection of Hall-of-Famer Allen Iverson, the Sixers use the first pick to draft what they hope is the next great superstar player to play pro hoops in the city of Brotherly Love.

If you want to talk about Simmons’ upside, he has certainly plenty of it.

There’s not too many players with Simmons’ size that can dribble and pass the ball like him, and I can only think of two.  One of them is Hall-of-Famer Magic Johnson and the other guy is that LeBron James fella from the newly-crowned NBA champion Cleveland Cavaliers.

Now no one’s suggesting that Simmons is the next LBJ right off the bat, but his ability suggests that he could be something special.

During his brief tenure in Baton Rouge, Simmons averaged 19 points, 11 rebounds, and 4.8 assists per game.  Simmons can score in the low post and he has the court vision of a point guard. He’s that rare player who has the ability to make others around him better.

The weakness to his game is that he’s not the best outside shooter in the world, but that’s something he can work on. During his days at LSU, Simmons rarely shot the ball from beyond the three-point arc, attempting three and hit just one.

Outside shooting ability was something that Magic and James had to work on when they first came into the league.

If the Sixers can somehow pull off the trade to get into the Celtics third spot and pick Dunn, they will be getting a 6-4 point guard, who averaged 16.4 points and 6.2 assists per game in his senior season at Providence. He also pulled down 5.3 rebounds per game.

Of course, trading away an Okafor or a Nerlens Noel would also assume that center Joel Embiid is going to be completely healthy and 100 percent to play next season. Throughout the spring, there have been signs that Embiid is moving closer to being ready to play.

Recently, it was reported that Embiid was cleared to participate in five-on-five drills with the Sixers summer league team, but he won’t be playing in the games. The belief among 76ers coaches and front office people is that Embiid is going to be the player to put the Sixers back on the winning track.

If he’s healthy, the 6-11 Embiid has the potential to be that dominant low-post player. But you have to wonder if Embiid can stay on the floor once he does come back without being too injury prone.  Sixers fans are still smarting from the bizarre tenure of Andrew Bynum, whose ailing legs kept him from ever playing a game as a 76er.

With the selection of Simmons, the 76ers and their fan base are hoping that this is the first sign of light in an otherwise dark and dismal last four years.