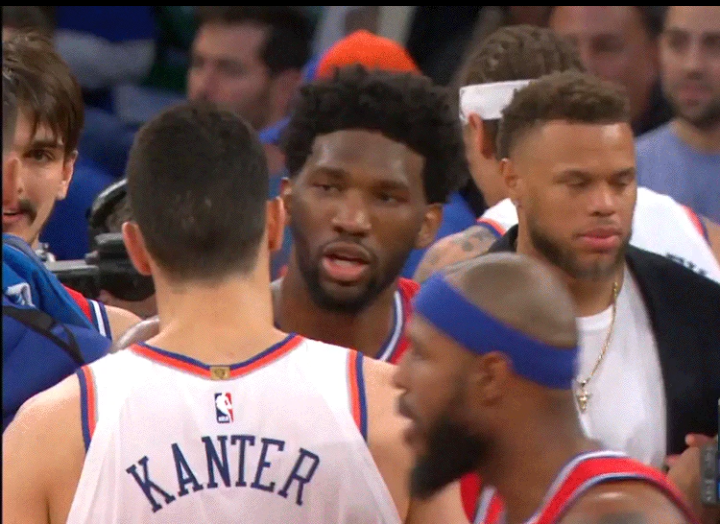 NEW YORK, NY – Given the day and the circumstances, we know this theme is probably as easy and cliched to use as any, but we’re going with it anyway.

The 76ers took the floor for Monday’s Christmas matinee at Madison Square Garden very much looking for full health, and a win to go along with it. Both wishes were fulfilled, as the team celebrated the holiday with a 105-98 victory over Atlantic Division rival the New York Knicks.

The win brought an end to the Sixers’ five-game slide, and marked their second win in their last 11 games. The triumph was also the club’s first on Christmas Day since 1988, when they beat Washington at the Spectrum.

With Joel Embiid and JJ Redick back in action Monday, the Sixers made the most of having two key weapons at their disposal. Embiid was a force, finishing with 25 points, 16 rebounds, and 3 blocks. Redick, a veteran of now eight Christmas games, tallied 24 points (4-8 3fg), and hit a critical 3-pointer with three and a half minutes to go in the fourth quarter to put the Sixers up by 7 points, 96-89.

On an afternoon Brett Brown was seeking a spirited showing from his group perhaps almost as much as a win, T.J. McConnell responded in on-brand fashion. The feisty point guard provided 15 points, scoring 8 in a row to close the third quarter, a spurt that allowed the Sixers to seize control.

Ben Simmons, who sported festive green Nikes during pre-game warm-ups, compiled a line featuring 8 points, 8 boards, and 3 assists. His signature moment came with 66 seconds to go, when he intercepted a Kristaps Porzingis pass and turned it into a run out jam, 103-95.

The Sixers overcame a career outing from New York center Enes Kanter, who had 31 points and 22 rebounds. Porzingis tallied 22 points.

Sixers finding themselves during tough stretch of games