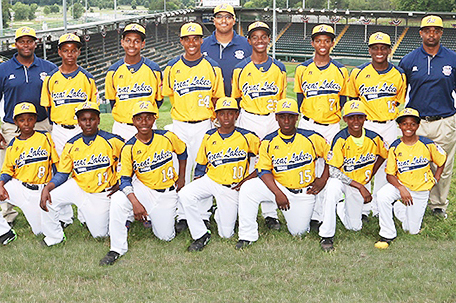 The story of Chicago is Jackie Robinson West Little League baseball team being stripped of their U.S. Little League World Series title is a sad tale of an epic fail by adults.

Little League International stripped the Jackie Robinson West squad of it’s title because team officials violated the rules expanding the boundaries from which they get players without asking permission of the neighboring districts.

From all I’ve read and heard about this situation, I can’t help but say that the only visible heroes here are the kids who of the Jackie Robinson West squad that pitched, hit and ran their way to the U.S. title. Those kids were the only thing that was real about this whole situation.

The adults from the coaches and administrators of Jackie Robinson West to “whistle-blower” Chris Janes, vice president of the Evergreen Park Little League and Little League Baseball International- are the real scoundrels in this sorbid affair.

The coaches and organizers of Jackie Robinson West, should have come clean about the other leagues with its boundaries. As was reported, the JRW coaches admitted that the boundaries they drew to get players were at the very least questionable, if not downright wrong.

You would think that JRW coach Darold Butler would have realized that this whole thing was going to come out at some point, especially with the national publicity the team ultimately received.  Winning should not come at the expense of your integrity or your ability to make sure all the I’s are dotted and all the T’s are crossed.

Equally as egregious was the Illinois District 4 administrator and for that matter, Little League Baseball International’s failure to have a better system of making sure each team is following the rules before the tournament starts. So that there’s no question of impropriety.

That said, I will not give any medals of valor and virtue to the vice president of the Evergreen Park Little League. Janes, whose squad got thumped by JRW 43-2 in four innings, was like the maniacal Inspector Javert in Victor Hugo’s Les Miserables; going after Jean Valjean even though he was trying to reform his life.

Really? Was that for love of the game or for the sour grapes of wrath?

Wihen Janes’ team took from a group of primarily inner city Black kids, who don’t traditionally play baseball, something just wasn’t right. Something has to be wrong with this picture, right? There’s no way that’s supposed to happen.

To a lot of African-Americans in Chicago, this whole thing smacks of racism when you consider the vigor with which Janes went after Jackie Robinson West. Venisa Green, mother of JRW player Brandon Green, definitely thought it was about race.

“It is amazing to me that whenever African-Americans exceed the expectations, that there is going to be fault that is going to be found in what it is we do,” Green said to the Chicago Sun-Times.

Would Janes have made these allegations if JRW not beaten his team so badly or had they not won the U.S. Championship? If Evergreen Park had beaten JRW, would Janes have gone through the pains of complaining about the team’s boundaries?

Rev. Michael Phleger, the pastor of Chicago’s St. Sabina Church who participated in a rally with the Rev. Jesse Jackson protesting the sanctions against JRW, told the Chicago Sun-Times it wouldn’t have been an issue if they team lost to Nevada.

“Are you telling me that the same kind of obsession of stalking, going over this month, would have happened-would have been done—if the Las Vegas had won?” Phleger said. “I’m sorry. I live in America. Maybe I’m tainted by that. But I believe that. And I believe that racism is in the midst of this thing.”

In yet another example of how the adults screwed this thing up, ABC-7 TV in Chicago interviewed an African-American mother whose son played in the Evergreen Park Little League despite not living in the same area. Renee Cannon-Young said her son’s residency was forged and it was hypocritical for Janes to come after JRW.

“The paperwork was filled out for me. I was told that although he was not a resident of Evergreen Park, they were going to fix that so that he could play. Use another address and he’ll be able to play,” Cannon-Young said.

The ABC-7 report said it was common practice for teams to engage in getting kids from beyond their designate boundaries.

Little League Baseball is supposed to be that field of dreams where it’s all about the kids and the pure joy associated with the love of the game. Instead, it has become a garish nightmare and a microcosm of all that is wrong in the world of adults.

If it has any semblance of understanding and compassion, Little League International should restore the U.S. Title to the kids of Jackie Robinson West because they did nothing wrong but play well in the game they love.

It was the grownups that broke the rules and acted like petulant children. The JRW players should not have to suffer because of the sins and stupidity of their elders.