Simone Manuel’s gold medal is not just for her 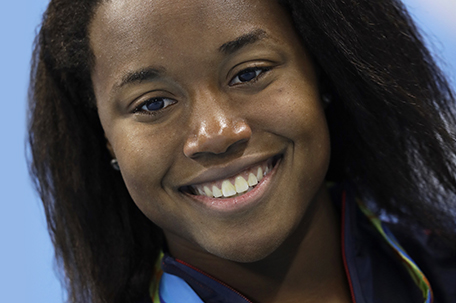 ABOVE PHOTO:  United States’ Simone Manuel shows off her gold medal during the medal ceremony for the women’s 100-meter freestyle final during the swimming competitions at the 2016 Summer Olympics, Friday, Aug. 12, 2016, in Rio de Janeiro, Brazil.  (AP Photo/Michael Sohn)

RIO DE JANEIRO — When she was 11, Simone Manuel came home and asked her mother a question: Why weren’t there more people who looked like her in swimming?

Mom didn’t have an answer.

“We got on the internet and did some searches and we came up with some information,” Sharron Manuel said. “At that moment she really realized she was OK with who she was. It was important for me to do that for her because even at that time I saw she could do something special.”

Her parents were in the stands behind the medal podium at the Olympic Aquatics Center on Thursday night to see their daughter swim her signature event at the Rio Games. When it was over, Marc and Sharron Manuel couldn’t immediately see the videoboard with the results.

The 20-year-old from Sugar Land, Texas, had just become the first African American woman to win an individual gold medal in swimming. Her time of 52.70 seconds in the 100-meter freestyle was an American and Olympic record.

“Then my husband saw Olympic record and saw she had gotten first,” Sharron told The Associated Press by phone Friday. “We know how hard she had worked and she had sacrificed a lot to get to this point.”

While the world and social media lauded her milestone, Manuel didn’t have time to celebrate. She was right back in the pool on Friday, qualifying 11th in the 50-meter freestyle preliminaries. She was staying off her phone that froze up because of an overload of text messages and calls.

“I just wanted to re-focus and move forward from the 100,” she said. “I haven’t really gotten a chance to take everything in, but that’s OK because I want to do well in the rest of my events this week.”

Manuel recognizes the significance of her achievement, yet she has never wanted to be defined solely by the color of her skin. After her win, she mentioned police brutality in the U.S. and said she hoped her victory helps mend the nation’s racial divide in some way.

“She wants to be seen as an individual who just like everyone else has worked hard to be where she is,” Sharron Manuel said. “She would like to be recognized for her merits and dedication. It’s not just about her skin color. She understands that it’s a part of it.”

At the same time, Manuel knows that by winning Olympic gold in a sport that still has few people of color, especially in the United States, she carries what she described as “the weight of the black community.”

She put her head in her hands and wept in the pool after she tied 16-year-old Canadian Penny Oleksiak and realized the depth of her achievement.

As a child, Manuel always loved the water. When she was 18 months old and her mother’s back was briefly turned, she scurried into the bathtub fully clothed to play with her brother.

“We would have to watch her if it was bath time because she would always try to sneak off to get in the bathtub with him because she loved the water,” her mother said. “We didn’t know then that this is what we were in for.”

She started swimming at a pool near her childhood home in Brooklyn, New York, where the other kids were mostly Chinese from her school located in Chinatown. Manuel learned Mandarin as a result.

She stuck with swimming while her brother played basketball. In 2010, she experienced a turning point, being chosen for USA Swimming’s diversity select camp, where she met other talented minorities. That inspired and motivated her to keep going. Now at Stanford, she is majoring in science, technology and society.

Before Manuel, there were only a handful of minorities on the U.S. national team. Cullen Jones was the best known, having won two golds and two silvers at the last two Olympics. He is a major proponent of USA Swimming’s “Make a Splash” campaign that seeks to prevent drownings by teaching youngsters to swim with an emphasis on minorities.

African Americans make up just 1.3 percent of USA Swimming’s 337,084 members, according to the governing body’s 2015 membership data. But those numbers have been creeping up slightly in the past few years.

Swimming has struggled to attract minorities in part because typically those who can’t swim had parents who also could not swim and were fearful of drowning. According to USA Swimming statistics, 70 percent of African Americans and 60 percent of Hispanic and Latino children cannot swim compared to 40 percent of whites. Black children drown at a rate nearly three times higher than their white peers.

A generation ago, African-Americans were largely denied access to pools and so it never became part of their recreational culture to swim. In the 1960s, many whites left cities for private pools and clubs in the suburbs, where segregation continued to exist.

JaVe Bonner, a pre-med student at George Mason University, said Manuel’s win is significant to her because she was told when she was younger that she couldn’t go into a neighborhood pool since her skin was “dirty.”

“To me, this win shows that black people are resilient and soar through adversity,” she wrote in an email.

Jones, who didn’t make this year’s Olympic team, tweeted out his pride in Manuel, calling her achievement “amazing.” Congrats also poured in from Tony Award-winning actor and writer Lin-Manuel Miranda of the Broadway smash “Hamilton” and NBA Hall of Famer Magic Johnson.

Manuel was quick to single out Jones, Olympic and Stanford teammate Lia Neal and former Olympic swimmer Maritza Correia for blazing a path for her.

“The gold medal wasn’t just for me, it was for people who have come before me and inspired me to stay in the sport, and for people who believe they can’t do it,” she said. “I hope I’m an inspiration for others to get out there and try swimming. They might be pretty good at it.”