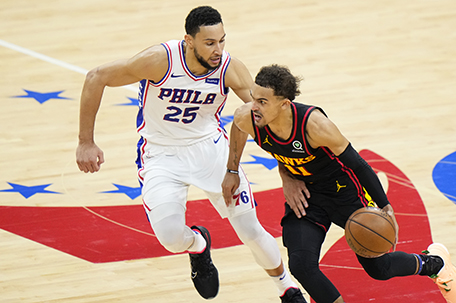 ABOVE PHOTO: Atlanta Hawks’ Trae Young, right, tries to get past Philadelphia 76ers’ Ben Simmons during the second half of Game 7 in a second-round NBA basketball playoff series, Sunday, June 20, 2021, in Philadelphia. (AP Photo/Matt Slocum)

In order for the Philadelphia 76ers to get as far as their talent will allow, the organization has to do something about the Ben Simmons issue.

As quickly as the time ran out on the Philadelphia 76ers season in Game 7 of their Eastern Conference semifinal loss to the Atlanta Hawks, the inevitable moment that Sixers fans have agonized about over the past four years finally came.

The sum of all Sixers fans’ fears about enigmatic point guard Ben Simmons’s shortcomings showed itself in an unlikely and unceremonious playoff exit. Simmons apparently unwillingness to develop his game as a shooter and improve his free throw shooting came back to bite a Sixers team that seemed destined for its first trip to the Eastern Conference and quite possibly the NBA Finals since 2001.

In four straight games in the series, Simmons failed to score a point in the fourth quarter and shot a tepid 34% from the Charity Stripe. His performance at the line was in fact so horrid that the Hawks employed a “hack-a-Ben strategy”, knowing he’d miss. That move enabled, among other things, enabled the Hawks’ comeback from an 18-point-deficit in Game 4 and a 26-point deficit in game 5.

In the Game 7 loss, Simmons had a chance to throw in a game-tying dunk with 3:29 left in the game, but he inexplicably passed the ball to Matisse Thybulle who got fouled. Thybulle sank just one of the two free throws and cut a two-point Hawks lead to one, which was as close as they would come for the rest of the game.

When the game ended, Sixer fans at the Wells Fargo Center rained down boos and chants for Simmons to be traded.

To be sure, the 76ers loss to Atlanta in Game 7 and the entire series wasn’t all Simmons’s fault. You can question some of head coach Glenn “Doc” Rivers’ coaching moves like, for example, finding someone other than Seth Curry to guard Hawks small forward Kevin Huerter, who torched the 76ers for 27 points. There were also the eight turnovers by Joel Embiid and the 17 overall by the team or a poor shooting outing by Tobias Harris who scored 24 points on 8-of-24 shooting.

How you ever you break it down between blown leads, bad coaching decisions, and turnovers, the one thing you can’t have is your starting point guard be unwilling to take a shot or not be able to hit free throws consistently. For all of Simmons’s array of talents, his defensive skills, rebounding, and playmaking, the fact that he hasn’t developed a consistent shot, and his inability to hit his free throws, has not only hampered his development, but also that of the team.

The joke around the league is that the 76ers are a few Ben Simmons jump shots away from being a contender for an NBA title. TV pundits like ESPN’s Stephen A. Smith have said that if Simmons ever developed a jump shot he would be as dynamic talent as LeBron James.

And that has been the constant “tease” about Simmons’s four-year tenure in Philadelphia. We keep touting a potential that he has not lived up to as of yet.

But even more insulting has been Simmons’ arrogance and outright disdain for anybody that covers the team that happens to bring it up during a press conference. Even worse have been those propaganda-like videos that show Simmons working on his jump shots during the summertime.

Sadly, you never saw Simmons try to shoot consistently. After the Sixers lost Game 4 of the Washington series, a reporter asked Rivers about Ben’s lack of offensive production and he admonished the reporter for daring to ask about it.

“No (it’s not fair) but you guys keep bringing up this Ben Simmons narrative alive which to me is freaking insane because of how good this is and all things he does, “Rivers said back in May.  “Ben is not a 40-point guy … I don’t understand why that’s not sinking in with our city.”

That’s because folks ain’t buying it and after Sunday’s humiliating loss in Game 7, Doc can’t be mad at the fans when the presumed second-best player on the team — a player that is making $30 million by the way — is not a scoring option and can’t hit a free throw in the fourth quarter of a playoff game.

About three years ago, I had a caller on my radio show on WURD voice his frustration that we in the media, along with rabid 76ers fans, keep harping on the so-called “narrative” of Simmons’s shortcomings mainly because he’s just a young player who will eventually get better with time.

Three years later, Simmons still doesn’t like to shoot, is an awful free-throw shooter, and this time it killed the Sixers’ chances to advance in the playoffs. It’s not the media narrative that did it, it’s Simmons not going to the gym and working on his game.

When he starts making 15-foot buckets on a regular basis and is hitting at least 70 percent of his free throws, it will be because of Simmons’s efforts to evolve his game and not because of anything we write or report.

All we do is a report and write what we see. If Simmons improves his game and leads the Sixers to a championship, we will write that story, but if he doesn’t, we will be having this conversation again.

Even Rivers’ faith in Simmons, who took just four shots, was somewhat shaken after his team was eliminated from the playoffs and didn’t seem to so sure if Simmons can be a point guard that leads a team to a championship.

“I don’t know the answer to that question right now,” Rivers said. ”I still believe in him, but we have work to do. We’re going to have to get in the gym and put a lot of work in and then go forward.”

If The Process is to ever include an NBA Championship, Rivers needs to do something that former coach Brett Brown couldn’t seem to be able to do: Hold Simmons accountable.