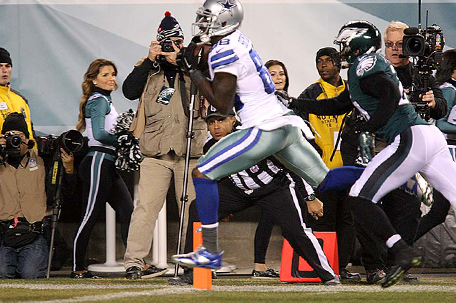 ABOVE PHOTO: Cowboys wide receiver Dez Bryant speeds past Eagles cornerback Bradley Fletcher for a 26-yard touchdown pass in the Cowboys win over the Eagles.  (Photo by Webster Riddick.)

At this time two weeks ago, the Philadelphia Eagles were flying high after a 23-point thrashing of the Dallas Cowboys on their home field on Thanksgiving.

The Birds seemingly had everything under control and appeared to be in control of their playoff destiny.

Two weeks later, the Eagles find themselves in the position of having to depend upon others in the last two weeks of the season thanks to a 38-27 loss to a suddenly resurgent Dallas Cowboys squad Sunday night at Lincoln Financial Field.

It was the Birds second straight loss and they are now 9-5, one game behind the first-place Cowboys (10-4) in the NFC East with two games left to play.

If there’s a silver lining for the Eagles after this tough loss to Dallas is that they play two sub-500 teams in NFC East rivals, Washington and the New York Giants.

“The only thing that matters is our next game,” said Eagles head coach Chip Kelly. “We can’t think anything long term. We don’t worry about who does what and who does anything. If we don’t go out and beat Washington, then it’s kind of a moot point anyway.”

While it’s always tough to win games in the division, neither one of those teams have been confused with world-beaters this season. In other words, the Birds should win their last two games.

Meanwhile, the Cowboys have to play AFC South champion Indianapolis Colts at home—a game that won’t be easy at all and they close out their season against archrival Washington, who beat Dallas at home early in the season.

Dallas is 3-4 at AT&T Stadium this season and has a terrible tendency to follow up a good game with a clunker. The Colts will have some incentive to win the game because they are still fighting to get a bye in the first week of the playoffs.

And so before you Eagles fans start jumping off the Ben Franklin and Walt Whitman bridges, the Birds could still win the division before it’s all said and done.

If the Eagles expect to win they’ve got to fix a few dents in their armor they have to fix along the way that really got exposed in the loss to the Cowboys. The combination of quarterback Tony Romo and wide receiver Dez Bryant simply had their way with the Eagles secondary as the duo combined for three touchdown passes.

Eagles cornerback Bradley Fletcher simply could not handle Bryant, who caught six passes for 114 yards and the aforementioned three touchdowns. Romo completed 22-of-31 passes for 265 yards.

“I just didn’t make the play I needed to make,” Fletcher said after the game. “It’s something I have to live with. I just have to get back to work and get better. That’s all I can do.”

Getting off to a good start and getting out of the way of your own mistakes will help the Eagles as well.

Against Dallas, the Eagles misfortunes started from the opening kickoff when rookie kick returned Josh Huff failed to field the opening kickoff, enabling the Cowboys to recover what amounted to a long onside kick deep in Birds territory.

Five plays, later the Cowboys took a 7-0 lead on a one-yard run by running back DeMarco Murray. Dallas would score on their next two possessions thanks to touchdown passes from Romo to Bryant to take a 21-0 lead.

The rout appeared to be on. But then the Eagles surged back and scored 24 straight points to take the lead and it looked like they were about to seize control of the game.

Romo and the Cowboys responded with an eight-play, 78-yard drive that finished with a two-yard run by Murray to put Dallas back in front 28-24 early in the fourth quarter.

Just when it looked like the Birds were going to get back in it, they simply could not get out of the way of themselves. Quarterback Mark Sanchez threw the first of his two fourth quarter interceptions to safety J.J. Wilcox. Four plays later, Romo hit Dez Bryant for a 25-yard touchdown pass to give Dallas a 35-24 lead.

“It felt like we were going to take control. I mean we had the momentum and things were going our way, said tight end Brent Celek. “Then things started go sour. It wasn’t good. I’m disappointed we lost. It sucks.”

A Cody Parkee field goal brought the Eagles within eight. With a little over eight minutes left, the Birds had an opportunity to drive for the game-tying score but tight end Brent Celek fumbled a 14-yard pass from Sanchez at the Eagles 34.

The Eagles for the game committed four turnovers and also had a bad habit of shooting themselves with penalties.

“We just have to take care of the football,” said wide receiver Jeremy Maclin. “I don’t know what other way to put it.”