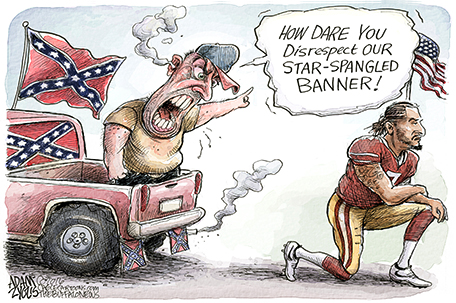 While fans are talking an NFL boycott to protest Colin Kaepernick’s lack of a new team, voices that should be speaking out aren’t.

With NFL teams still avoiding quarterback Colin Kaepernick like the plague because of his national anthem protest, African-American football fans on social media sites like Facebook and Twitter are saying they’ll “boycott” the league if he remains unsigned.

While it sounds like a good and principled stand on the surface, I doubt that it will move Commissioner Roger Goodell and the owners all that much. If folks decide to go after the league’s advertisers, that might move the needle, but it would take an organized effort and would also depend on the advertisers involved.

That said, there are a number of entities within the African-American community that have been eerily silent on the issue of Kaepernick and his obvious blackballing at the hands of NFL owners.

In fact, the most obvious effort on Kaepernick’s behalf appears to be coming from his fraternity, Kappa Alpha Psi. On Aug. 23, the fraternity, the Justice League of New York City, as well as other civil rights organizations, are planning a rally in front of the NFL’s headquarters to protest what they see as the league keeping Kaepernick from plying his trade.

That will probably be the closest thing to a collective effort by the Black community on behalf of Kaepernick.

Another group that hasn’t said much publicly has been the NFL Players Association and executive director DeMaurice Smith.

If all the African-American players were to come together and say that they were sitting out the season until Kaepernick is signed, it would bring the NFL to its knees.  Black men make up 70 percent of the NFL’s players.  Without those players, NFL teams wouldn’t be able to field a special teams unit.

While individual players like Seattle Seahawks safety Richard Sherman and Philadelphia Eagles safety Malcolm Jenkins have voiced their support for Kaepernick, but the players as a group or even as a rank and file members of the NFLPA have not come together as an organized collective to challenge Goodell and the owners.

The league’s African-American players see the blackballing of Kaepernick as the owners’ way to keep the players in their place and to intimidate any future activists from coming up. It’s the NFL’s way of saying, “Just shut up and play.”

Back in 1965, Black American Football League players, Abner Haynes and Cookie Gilchrist, organized a boycott of African-American players, who were being discriminated against in various places throughout the city of New Orleans. The players said they would not play in the AFL’s All-Star game unless the game was moved from New Orleans.

The collective efforts of the Black players and a few Whites who joined them eventually got the game moved to Houston.

At the end of the day, the African-American players themselves have to stand up for Kaepernick, because this is nothing but a power move by the owners to instill the fear of the shield into the players.

Especially the Black ones.

To show your support for NFL QB Colin Kaepernick go to standingforkaepernick.org.

The NFL Lockout: Are you ready for a strike?