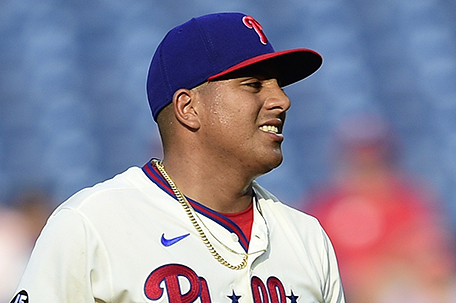 When Phillies closer Ranger Suarez is on the mound, he’s there to get you out.

I have often found it somewhat annoying when fans or media folks come down on a young player who shows a large degree of swag and a little bit of arrogance.

To me, that’s a positive in a player, especially when he can back it up and help your team win.

And so, when Phillies reliever Ranger Suarez was called on to save the game in the ninth inning on July 3 against the San Diego Padres, where he had to face tough hitters like Fernando Tatis Jr., Jake Cronenworth, and Manny Machado while helping his team hang onto a fragile two-run lead, he shut them down to get the win.

After that game, Suarez said he welcomes any opportunity to help his team no matter how difficult the moment. Speaking through an interpreter, the 25-year-old said he has belief in his ability to pitch in any situation and wouldn’t mind being the team’s closer for the rest of the season.

“I would be down for that role,” Suarez said. “Ultimately for me, it’s about helping the team win in any situation. It doesn’t matter what inning it is, I’ll be ready whenever they call my name.”

And that’s what you need in a closer. A guy with a supreme belief in himself when the game is on the line. After a tumultuous first half of the season where the back end of the Phillies bullpen had difficulty hanging onto leads, Suarez could be that guy in the team’s run to catch the first-place Mets.

“With the way he’s pitching, you would expect him to have a ton of confidence because he can locate,” Phillies Manager Joe Girardi said. “He can throw his fastball on both sides of the plate. He can throw his changeup and he can throw his slider. He’s really in a good spot right now.”

In the Phillies’ last game before the All-Star break, Suarez had a seven-out save against the Boston Red Sox at hitter-friendly Fenway Park. Throughout the season, Suarez has performed well and arguably better than any of the relievers that Girardi has thrown out there this season.

So far, this season, Suarez is 4-2 with three saves and a .075 earned run average in 36 innings amid the bullpen’s inability to hang on to leads late in the game or failing to put out fires when the starters leave the game with men on base.

“He’s played a huge part in a lot of our wins whether it’s been multiple innings or one inning,” Girardi said. “He’s had a great first half.  …There have been some unsung heroes for our team and Ranger has been one of them.”

The question for Suarez is whether or not he can be consistent on a regular basis because it’s easy to go around the league and be a success before teams begin to figure a closer out.

Since Suarez assumed the closer’s role, the Phillies now have 21 saves and 23 blown saves.

I don’t quite know how good Suarez can be as the closer on an ongoing basis because there’s a bunch of games left in the season. I wonder how he’s going to come back after his first-blown save. But when you have seen this Phillies team blow as many leads this season, you need to find some sign of hope.

What I really like about Suarez is his confidence and swag. This bullpen has needed someone to say that “I’m the man in the bullpen.” As this team goes about chasing down a beatable New York Mets squad, I hope that Suarez can live up to the confidence he has in himself for the rest of the season because they’re going to need it.

The Phillies continue a three-game series against the Atlanta Braves at Citizens Bank Park this weekend.