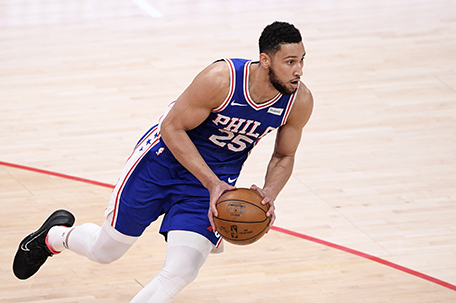 ABOVE PHOTO: Philadelphia 76ers guard Ben Simmons (25) in action during the second half of Game 4 in a first-round NBA basketball playoff series against the Washington Wizards, Monday, May 31, 2021, in Washington. (AP Photo/Nick Wass)

A little over 48 hours after all of his critics came out of the woodwork to chide him for his inconsistency at the free-throw line in the 76ers Game-4 loss to the Washington Wizards, Ben Simmons gave a not-so-subtle reminder of why he is one of the best players in the NBA despite his more obvious flaws.

In the Sixers series-clinching win over the Wizards in Game 5 of their first-round playoff series, Simmons silenced his detractors with triple-double-19 points, 11 assists, and 10 rebounds- to lead the 76ers to a 129-112 win over the Wizards to advance to the Eastern Conference semifinals.

The Sixers will take on the Atlanta Hawks on Sunday in Game 1 of their best-of-seven series at the Wells Fargo Center.

In the win over Washington, Simmons did all the stat-stuffing things he usually does and put the team on his back in the absence of injured center Joel Embiid. He led by urging his teammates to play at a higher level.  While playing the video game, “Call of Duty-War Zone,” with teammate Seth Curry, Simmons challenged him to score 30 points.

“We were playing before our pre-game nap. He told me, ‘I need 30 from you and I’m going to get a triple-double so we can close it out,” Curry said. “We were able to go out and get it done.”

And the former Duke star did just that. Curry scored 30 points on 10-of-17 shooting and was 3-of-6 from three-point range.  Tobias Harris added 28 points. Rookie Tyrese Maxey contributed to the Sixers’ cause with 13 points. The Sixers had six players scoring in double figures.

“Seth stepped up, did this thing. Maxey came in and was tremendous,” Simmons said. “Everyone played their role and played their part and everyone was a part of the win.”

Simmons also did his part on the defensive end, especially in the second half, when he held Wizards guard Bradley Beal to 4-of-12 shooting in the second half.   When Washington resorted to the “hack a Ben” strategy late in the first half, Simmons responded by hitting five of eight free throws.

That probably brought some comfort to Sixers head coach Doc Rivers who vehemently defended Simmons after reporters grilled him during the postgame press conference following the 76ers loss in Game 4.

“I keep saying it, stick with him,” Rivers said on Wednesday. “Just stick with him. He’s a hell of a player, but he’s also human. He’s going to have some great games. Far more great games and less bad. That’s who he is. He does so much for the team. He does.”

Meanwhile, Embiid is day-to-day as he is trying to heal from a torn meniscus in his right knee and he will have some additional rest.  But the Sixers have proven throughout the regular season that they can still play well and win.

Sunday’s Game 1 against a Hawks squad led by high-scoring point guard Trae Young is going to be a huge task if Embiid is not on the floor for the 76ers. But Harris said the Sixers have often had to play without their star center and they have the talent to win in the playoffs without him.

“Obviously, we want (Embiid) to get healthy, we want him to be with the group when he’s ready,” Harris said. “We know as a team this is the playoffs, nobody’s going to wait for us, so whether he’s out there or not, we still have to be ready. That’s just the nature of the beast.”

Game 1 of the best-of-seven series between the Philadelphia 76ers and the Atlanta Hawks is on Sunday at the Wells Fargo Center. Tip-off will be at 1p.m.; the game can be viewed on 6ABC.