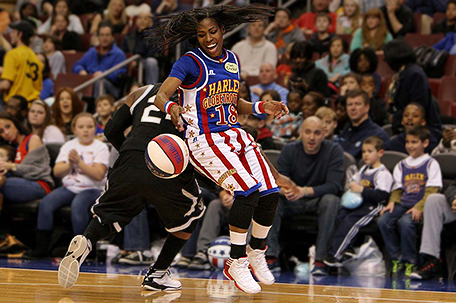 Ever since she started playing basketball, former Temple women’s basketball star Fatima Maddox has always dreamed of playing professional basketball and showing off her skills.

During her college days at Temple, Maddox played point guard for then head coach and Basketball Hall-of-Famer, Dawn Staley, helping lead the Owls to a pair of NCAA Tournament appearances and an Atlantic-10 title in 2006.

After Temple, Maddox played professionally in Sweden for a few years. In 2012, Maddox’s  pro hoop dreams became even bigger than she imagined when got a tryout with the world-famous Harlem Globetrotters and became the first woman to make the team since 1993.

“I get a phone call to try-out for the Globetrotters and I’m like, ‘Are women allowed on that team?’” Maddox said. “I showed up with no expectations, not really knowing what to expect and it worked out for me … I ended up making it and I’ve been living a dream ever since.”

Now known as “TNT”, Maddox is having the time of her life as a Globetrotter entertaining the crowd with slick ball-handling skills reminiscent of legendary Globetrotter Fred “Curly” Neal. The former Temple guard was in town for their show at the Wells Fargo last weekend.

As much fun as Maddox is having on the basketball court, the most meaning for part during the grind of playing 250 or so games across the country and around the world is that she gets to interact  with the fans on and off the court, especially the kids.

“This gives me a chance to do so much more off the court as well as on the court as far as charities,” she said. We go to a lot of schools and we do a lot of school visits. It’s been rewarding for me. Now I visit hospitals with sick kids. I visit schools. It takes everything that I’m about and intertwines it.”

During the Globetrotters visit to the Wells Fargo Center, Maddox participated in all the famed Globetrotter antics, the famous weave play, the pre-game circle, hidden ball tricks and she did her signature sliding dribble plays and twirling and spinning the basketball on her fingers.

“I like the slide dribble that I do so I get to break that out whenever I can,” Maddox said. “I’ve always been good at dribbling and that adds a little something to it.”

Maddox said Curly Neal has been one of her biggest fans.

“(Neal) is so encouraging. He’s a legend,” she said. “He tells I’m doing a good job. He’s always encouraging me to get better, so I hoping I’m making him proud.”

When she wasn’t on the floor and playing with her teammates, Maddox was in the crowd hugging the kids and giving them an opportunity to come on the floor with the Globetrotters. That aspect of being a Globetrotter seemed to make her big smile even bigger.

“The smiles on those kids faces, those are priceless,” Maddox said. “If I can bring joy to somebody by doing something I love to do. That’s the fun part for me. It’s been awesome, it really has been.”

As the lone woman on the team, Maddox has held her own with the guys and has earned a great deal of respect from her male cohorts.

“TNT is amazing. … She’s one of the best ball-handlers on the team,” said Chris “Handles” Franklin. “It’s not like she’s a gimmick. She can really play basketball. She can dribble, she can shoot, she can do it all.”

“Most importantly, she’s an inspiration to all the women out there. She show’s you that you can do anything you want when you put your mind to it,” he said.