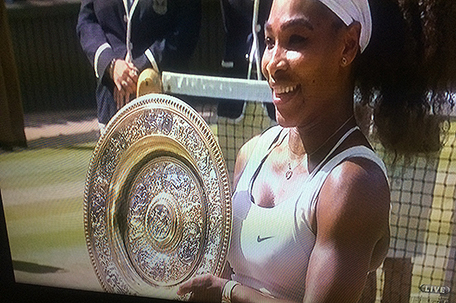 Serena Williams didn’t play her best match against Garbine Muguruza in the Ladies Singles Final at Wimbledon. She lost the first two games of the first set, had eight double faults and withstood the storm of tumultuous rally by her Spanish opponent.

Throughout the fortnight at Wimbledon, Williams overcame losing the first set in matches and even survived an opponent’s match point in the quarterfinals. But fighting through those obstacles further magnified her legend as one of the greatest tennis players of all-time—man or woman.

In the end, Williams was the only one left standing and came away with a 6-4, 6-4 win over the game 21-year-old Muguruza. The win puts Williams one step closer to the calendar year Grand-Slam. It was her sixth singles titles at Wimbledon. At 33-years-old, Williams is the oldest winner of a Grand-Slam title and has 28 Grand-Slam matches in a row.

If she wins the U.S. Open in September, Williams will be the first single-season Grand-Slam winner since Steffi Graf did it in 1988. For the second time in her career, the 33-year-old Williams holds all four Grand-Slam titles at once. The last time she did it was back in 2002-2003. This latest run on Grand Slam titles dates back to September when she won the 2014 U.S. Open.

Williams latest Grand-Slam singles title pushed her career total to 21, one behind Graf, who has 22 (the most in the Open era) and three behind Margaret Court, who has 24.

Somehow for all the attention that was focused on a lackluster fight between Floyd Mayweather and Manny Pacquiao, LeBron James quest to take an average Cleveland Cavaliers to the NBA Finals, and the recent triumph of the U.S. Women’s soccer team at the World Cup, Williams quest to win the Grand Slam has seemingly been on the periphery of events.

Maybe it’s because Williams has been such a dominant force in tennis that it’s become routine and so boring that some may feel she’s winning too much. After all, she doesn’t have a main rival that Martina Navaratilova had in Chris Evert.

The closest thing to a rivalry for Williams has been her sister Venus and Maria Sharapova, whom she’s beaten 18 straight times. All Williams does is beat whoever they put in front of her.

To be honest, I think if Williams was a slender, blond, white American woman with all her accomplishments, she would be a media darling and the whole country would be following her quest for tennis immortality in the same way the country embraced the U.S. women’s soccer team at the World Cup.

In the media, ocus has been on whether or not her body is too masculine. Williams’ body type clashes with classic notions of Western beauty and she often gets her share of vilification for it.

Maybe that’s an explanation for why Sharapova makes more money in commercial endorsements off the tennis court than Williams. She’s an assertive Black woman who is comfortable with herself and is not the self-effacing “mammy” type who goes out of her way to seek the acceptance of white people.

Whether folks like it or not, Williams is the greatest tennis player of her generation and arguably the greatest of all time. She’s got the trophies to prove it.

If you’re eyes aren’t focused on Williams now, they should be now because she is on the verge of accomplishing a rare feat in sports that’s only been accomplished just three times in the last 46 years-and just once by the men.

What will make Williams run to history compelling is that it won’t be easy, especially considering some of the tough matches she’s had at Wimbledon and the French Open. Williams has come perilously close to losing matches the closer she gets to pulling off this major milestone.

At this year’s French Open, Williams was involved in three-set matches five times, four came after she lost the first set.

In the third round at Wimbledon this year, Britain’s Heather Watson won the first three games of the third set, was up 5-4, and had Williams at match point. The young Brit was on the verge of a historic upset. But a fired-up Williams stormed back to win the last three games to close out the match.

Then Serena had to take on her sister Venus in a tough emotional match in the round of 16. In the quarterfinal against Victoria Azarenka, Williams dropped the first set and came back to win the next two sets.

And so the stage for the 2015 U.S. Open is set, Serena will be battling to add another chapter to her legend as one of the greatest-if not the greatest tennis players of all time.

So grab your popcorn and your favorite beverage, but please leave your racism and sexism outside and enjoy Williams’ quest for tennis immortality.