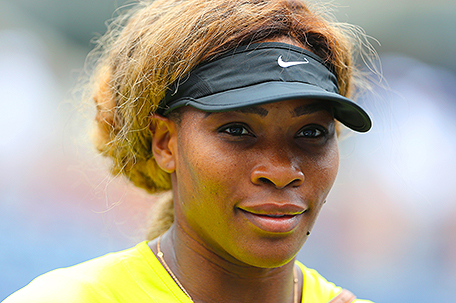 As the rest of the world was sleeping with visions of Seahawks and Patriots dancing in their heads, Serena Williams was in Melbourne moving closer and closer to tennis immortality with yet another dominant performance in a Grand-Slam event.

In a sport where you’re considered elderly in your late 20s, the 33-year-old Williams became the oldest female tennis player to win the Australian Open with her victory over an overmatched, but game Maria Sharapova in straight sets, 6-3, 7-6.

Williams won her 19th Grand-Slam singles title, the second most in the Open-era behind Steffi Graf who won 22. She moved past Martina Navratilova and Chris Evert, who both have 18. If she keeps playing at this level, the she could do it this year—which means Williams would win the tennis Grand-Slam, something that hasn’t happened since Graf did it in 1988. Since turning 30, Williams has won six Grand-Slam singles titles.

Williams said while the goal to catch Graf is within reach, she’s just focused on winning her next Grand-Slam event, which takes place in May at the French Open.

Serena and her sister Venus (seven Grand-Slam singles titles) have dominated the tennis scene so much over the last 15 years that you expect to see one of them in a Grand-Slam singles final whether it’s the French Open, the U.S Open  or Wimbledon. The sisters are considered to be one of the greatest doubles-tandem ever with 13 titles. They have never lost in a major final.

After the match, ESPN tennis analyst Pam Shriver said Williams is the greatest women’s tennis player of all-time when you consider those 13 doubles titles she won playing with Venus.

But wouldn’t it be great to see Williams catch up with Graf and win the Grand Slam in the process? To be sure, it’s going to be tough given her age and the youth of her competition. I’d like to see her go after it and become the greatest women’s test player ever in spectacular fashion.

As long as Williams stays healthy and keeps that blistering serve, she has a good shot at running the table with wins in the French Open, Wimbledon and the U.S Open.

From what I saw in Williams match against Sharapova on Saturday, it could definitely happen. Fighting through the match with a respiratory illness, Williams powerful serve kept Sharapova off balance throughout the match.

Williams had 18 aces in the match, including 15 in a tough, second- set tiebreaker in which both she and Sharapova held serve. Williams ended the match with a powerful ace to put her name in the record books.

If she were to retire today, Serena Williams with her 19 singles titles and 13 doubles crowns would definitely go down as one of the all-time greats in tennis or arguably the best ever. Not bad for a young woman who first learned her tennis, not in some stuffy, rich country club, but on the public courts in the Los Angeles suburb of Compton.

I don’t know how much Williams has left in the tank in her quest to catch up to and eventually pass Graf, but I would tell you to take every opportunity to see her try with her blistering serves and overall power because athletes like Williams don’t come along too often.