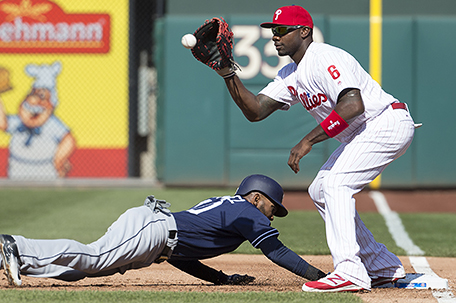 After the Phillies lost Monday’s home opener to the San Diego Padres, most of the media was gathered around 22-year-old Aaron Nola, who had a brilliant pitching performance in a 4-3 loss with a nine strikeouts and no walks.

Standing at his locker in the Phillies clubhouse was first baseman Ryan Howard, who was on the periphery of events this day, going 0-for-2 despite getting good wood on the ball.

While Howard said he wasn’t thinking about the possibility that it could be his last home opener in South Philly, he said really enjoyed the roar of a sellout crowd.

“It was cool being able to walk in there with (Phillies catcher Carlos Ruiz). The home openers are always great …You just take it all in and enjoy it,” Howard said.

With all the new guys milling about the clubhouse, Howard almost seems out of place. You don’t see the familiar faces like Chase Utley and Jimmy Rollins in the clubhouse. You don’t hear the latest hip-hop sounds from Rollins’s boom box that you used to hear after a Phillies win.

Those championship years must seem like a distant memory to Howard and Ruiz, the remaining veteran presences in the Phillies clubhouse and the recipients of a raucous ovation when they took the field on Monday.

It probably meant more to Howard who is likely to be traded by the Phillies by the time the July 31st trade deadline rolls around.

Howard said being around the younger players energizes him and seeing them get playing team reminds of him of when he first came up to the majors on a full-time basis back in 2005.

“You look around and you see a lot of guys getting their first taste of being in the big leagues and I remember that,” Howard said. “The excitement, the nerves, getting out there and getting all the nerves and then settling down and playing.”

“It means a lot because I know he’s been around for 10, 11 years. He’s the guy that can talk about everything, he’s the that can give you confidence. I hope he stays here,” Franco said “He talks about hitting…things that can bring me energy and get me mentally ready.”

The Phillies are in the midst of a youth movement and it shows in how they’re using Howard and the team’s other veterans.

For example, with the bases loaded in the sixth, Howard was replaced by pinch-hitter Darin Ruf because the Padres brought in a left-handed relief pitcher, something that never happened during the Phillies glory days from 2007-2011 when they five National League East titles, two NL Pennants and one World Series title.

But Howard is taking it in stride. In recent years, Howard has struggled against lefthanders, hitting just .130 last season. He took being replaced in that situation in stride and handled it like a professional, focusing on what’s best for the team instead.

“With your competitive nature, you always want to be up in that situation, but hey right now it is what it is,” Howard said. “I’m just trying to do what I can do to help this team win ball games. Right now, my focus is to take advantage of my opportunities when I can get it. That’s it really. Just focus on the game and get hits.”