Rutgers to kick off season against Temple, fans back 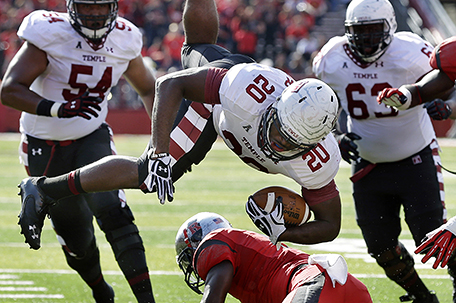 ABOVE PHOTO: Temple running back Kenneth Harper (20) dives for yardage over Rutgers defensive back Tejay Johnson (9) during the first half of an NCAA college football game in Piscataway, N.J., Saturday, Nov. 2, 2013. (AP Photo/Mel Evans)

PISCATAWAY, N.J.  — Greg Schiano is kicking off the second season of his second stint at Rutgers with another first this time around.

The Scarlet Knights are going to play host to Temple on Thursday night in a home game that will have no restrictions on fans. In fact, Rutgers has sold out the game with a crowd of 52,454 expected, the first home sellout since 2016 against Michigan.

Schiano said having the fans back will be fun. The key for the players is to keep their emotions in check.

“I know our team will be ready to go and our fans will be ready to go,” Schiano said. “SHI Stadium has to be home-field advantage. It wasn’t last year, we’re not going to hide from that. We didn’t do well in our home stadium. We need to change that this year.”

The Scarlet Knights went 3-6 last season playing an All Ten Big Conference schedule because of the pandemic. The three wins equaled the total number of victories for the previous two seasons combined. However, they were 0-5 at home.

Temple is entering its third season under coach Rod Carey. The Owls are returning 11 starters and have added 11 transfers to a team that went 1-6 last season in a campaign seriously restricted by pandemic protocols. They lost 215 man-games due to COVID protocol, injury, opt-outs, transfer rules, or suspension, an average of 30 players.

Rutgers’ Noah Vedral, who won the starting job last season as a graduate transfer from Nebraska, is getting another season because the NCAA did not count last season against eligibility. Vedral started seven games and hit 136 of 221 passes for 1,253 yards and nine touchdowns. He ran for 193 yards and a TD.

The Scarlet Knights averaged 26.7 points last season, an improvement of more than 13 points.

Mathis started the season-opener for Georgia in 2020 but quickly lost the job and transferred.

Rutgers added depth to its secondary when cornerback Patrice Rene transferred from North Carolina. It was expected he would start. However, he was injured in practice and will miss the opener.

Tre Avery and Max Melton will start at cornerback with Avery Young and Christian Izien at safety.

The group will be tested by Temple receivers Jaden Blue and Randle Jones. Blue, who had 95 catches in 2019, enters the season with 139 career receptions for 1,477 yards and nine touchdowns. Jones is the second option and has 69 career catches for 1,041 yards and seven touchdowns.

After winning three games last year, the expectations are high among the Rutgers’ faithful. Some are even thinking a bowl berth with 20 starters back.

“The sky’s the limit,” Young said. “There’s so much outside, but it’s all on the shoulders of our leaders. We’ll go as far as our leaders take us. Me, myself and the rest of the guys, we really want it. We showed that through our hard work in camp, and we’re going to display that through the year. There’s no stop.”

This will be the first time the schools, which are located roughly 60 miles apart, will be playing since a Nov. 2, 2013 American Athletic Conference game. That was the year before Rutgers joined the Big Ten. The Scarlet Knights beat then-coach Matt Rhule’s team 23-20 on a late TD pass from Gary Nova to Leonte Carroo.

The schools also played the game as members of the Big East Conference, which no longer has football.

The remnants of Hurricane Ida dumped several inches of rain in New Jersey on Wednesday. The National Weather Service said that the rain will stop sometime Thursday and the weather at game time will be mostly clear, with a low around 56.