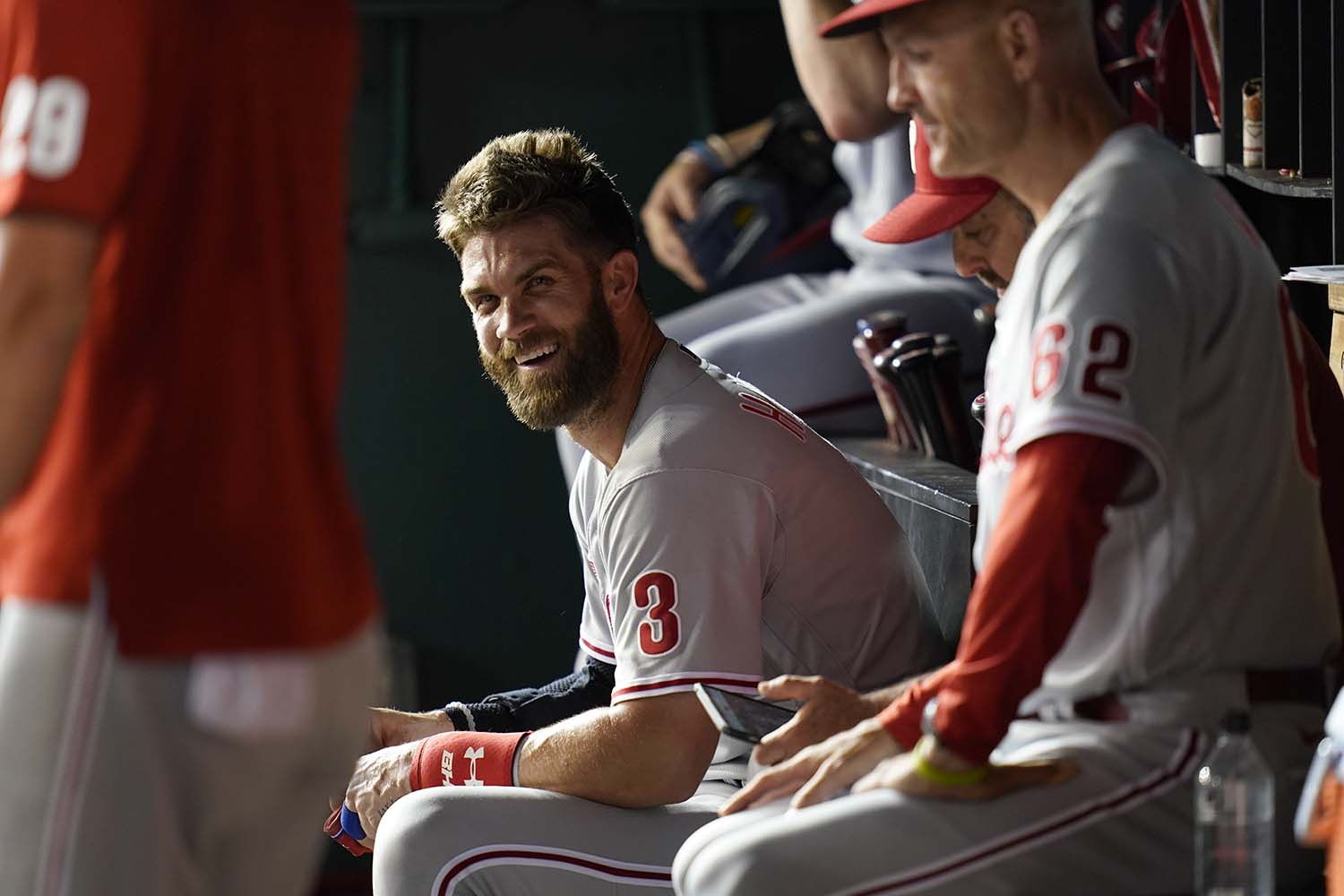 While the Philadelphia Phillies had some pitching issues in last night’s loss to the Atlanta Braves, the absence of MVP Bryce Harper — and his ability to drive in runs — spoke volumes.

Above photo: Philadelphia Phillies’ Bryce Harper sits in the dugout in the second game of a baseball doubleheader against the Washington Nationals, Friday, June 17, 2022, in Washington. (AP Photo/Patrick Semansky)

The Philadelphia Phillies bullpen came into Tuesday’s game against the Atlanta Braves having not allowed a run in 16 and two-thirds inning of work. After a game-tying home run by Phillies leftfielder Kyle Schwarber in the seventh innings, Phils relievers had the opportunity to extend that streak but couldn’t get it done.

In the top of the eighth inning, Braves catcher Matt Olsen hit a solo homer off reliever Andrew Bellatti and Atlanta added insurance in the top of the ninth to come away with a 5-3 win over in the first game of an important three-game series at Citizen’s Bank Park.

Playing in the second game since Bryce Harper was placed on the injured list with a fractured thumb, the Phillies offense couldn’t do much against Braves pitching and the team the reigning MVP’s presence in the starting lineup was definitely missed. His replacement, centerfielder Mickey Moniak was 0-for-3. The Phils were 1-for-10 with runners in scoring position.

“I think you feel like you miss Bryce every night, but we still got to get it done,” said Phillies interim manager Rob Thomson.

Thomson said the Phillies (39-36) did a good job of making Braves starting pitcher Charlie Morton throw a lot of pitches (102) but just couldn’t push home runs when they needed it most.

“I thought we had really good at-bats and drove his pitch count, be we couldn’t push (runs) across when we needed to,” Thomson said in his post-game press conference.

Perhaps the best opportunity the Phillies had to have a big inning against Morton was the third inning.  Schwarber reached on a walk and first baseman Rhys Hoskins singled to put runners on first and second with nobody out. Designated hitter Nick Castellanos hit a fading line-drive to right field that right fielder Adam Duvall snagged in his glove inches before the ball could touch the ground.

When Duvall got the ball back to the infield second baseman Orlando Arcia, stepped on the second base bag and threw the ball back to first to double up Hoskins, who was trying to get back to first. The Braves walked off the field thinking they had a triple play because the umpires didn’t make a call right away. But the replay showed that Schwarber had tagged up at second and went to third after Duvall’s catch.

Unfortunately for the Phillies, it was a double-play and the inning ended with catcher J.T. Realmuto making the last out by flying out to right.  Thomson said that Hoskins should have stayed near first base instead of being close to second base.

Meanwhile, Phillies starter Zach Wheeler got off to shaky start. He allowed back-to-back homeruns to Braves’ catcher Travis d’Amaud and Olson, who hit two home runs including the go-ahead homer in the eighth. Wheeler also gave up an RBI single to d’Amaud in the third inning to give the Braves a 3-1 lead.

“I needed to finish guys and that was the frustrating part about today,” Wheeler said after the game. “I didn’t have my best command in the past couple of starts. When I get two strikes on a guy, I gotta finish him and I made those mistakes that costs me the past couple of games.”

After the third inning, Wheeler settled down and didn’t allow Atlanta to score another run for the rest of the game. In six and one-third innings on the mound, Wheeler had eight strikeouts, one walk and allowed three runs on five hits. He threw 104 pitches and faced 26 batters.

“(Wheeler) left a couple of balls up in the first inning, but then he settled down and started driving the ball down in the zone and started moving people off the plate,” Thomson said. “As the game went on, his stuff got better.”

The Phillies chipped away at the lead with an RBI ground out by right fielder Odubel Herrera that drove home shortstop Didi Gregorius in the sixth and with Schwarber’s homer in the seventh. But the Braves took the lead for good on Olson’s second home run the game in their half of the eighth.

The second game of the three-game series between the Phillies and the Braves continues tonight at Citizens Bank Park. First pitch is at 7:05pm and you can catch the game on NBC Sports Philadelphia beginning with the pre-game show at 6:30pm.