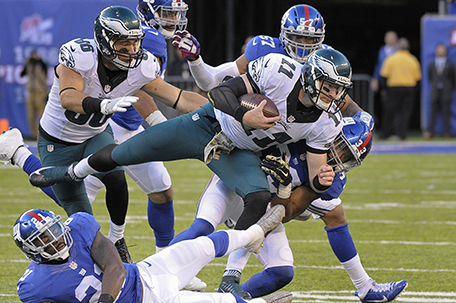 If the Philadelphia Eagles don’t figure out the issues in their running game, quarterback Carson Wentz is going to have to do a lot of running—for his life.

In the last two games, Philadelphia Eagles quarterback Carson Wentz has thrown the ball over 40 times.

When that’s happening, it’s usually because you’re behind by a couple of touchdowns and a couple of interceptions have been tossed along the way.

When you’re throwing the ball that much, it means that either (a) you don’t have much of a running game or (b) you’ve fallen behind by so many points that you have to abandon the run.

Not having a running game can be tough on a rookie quarterback, which is why Eagles head coach Doug Pederson admits that the team needs to expand it a little.

“Obviously, I think it does help Carson where you’re not putting everything, the whole game on his shoulders. We do a lot in the run game,”  Pederson said. “We ask Carson to do a lot with RPO [run-pass option] things, with the read options, making some checks there. So, I think going forward, yeah, probably should rely on the run just a little bit more.”

Or, in the case of the Eagles, establish a consistent running game designed to  take the pressure off Wentz at the very least. A run game would keep opposing defenders from bringing the heat to Wentz, who threw two interceptions under intense pressure  against the New York Giants.

For the last two weeks, running back Darren Sproles has gotten the most carries. As shifty and speedy as he is, the 5-foot-6 Sproles is not a lead back. On one fourth down situation against the Giants, he was taken down short of the first down marker.

The guy that should have carried the ball in that situation was Ryan Mathews, who’s a more of a power running back.  So far this season, he is averaging close to four yards per carry. He hasn’t gotten a lot of playing time in recent weeks. That might be because of a fourth-quarter fumble against the Detroit Lions in a crucial situation.

And then there’s rookie Wendell Smallwood. At some point this season, I would love to see him as the Eagles lead back.  I think he has the speed and  power to run through people. He reminds me of former Eagles running back LeSean McCoy, but with more of a willingness to run between the tackles.  Like Sproles, Smallwood is a threat to hit the big play in the running game. In other words,  I like his home-run potential.

But because Smallwood had a fumble in a crucial situation against the Dallas Cowboys, the coaches aren’t trusting him. But the fumble problems can be fixed through coaching and practice.  They also need to get Kenjon Barner out there, too.

The bottom line here is that they can’t have their rookie quarterback slinging the ball all over the place at 40 times per game because, that could land him on the injured reserve list eventually. For all the things I like about Carson Wentz, the most important ability he needs to have is availability.

That’s why Pederson and offensive coordinator Frank Reich really need to concentrate on the ground game.  Even if you don’t settle in on one lead back, figure out a way to utilize what those guys do well.

For example, Mathews is a good power back, especially in the red zone and when you need short yardage.  That’s the guy you use in third down and fourth down situations when you need to get a yard or two.

I would definitely mix in Smallwood between the 20s because I think he’s the most versatile back they have and has that big play potential.

More importantly, you have to take the pressure off the quarterback because while Wentz has the tools to be a solid quarterback, he needs the help of a consistent running game.

And if the Eagles want to make the playoffs, they might want to get that together sooner rather than later.