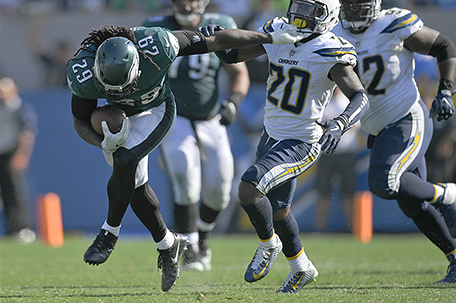 ABOVE PHOTO:  Philadelphia Eagles running back LeGarrette Blount (29) gets a hand on the facemark of Los Angeles Chargers defensive back Desmond King (20) as he runs during the second half of an NFL football game Sunday, Oct. 1, 2017, in Carson, Calif. (AP Photo/Mark J. Terrill)

In the first four games of the season, the Philadelphia Eagles running back by committee setup appears to be working.

The one obvious sign of growth for the Philadelphia Eagles in the team’s first four games has been the ability to run the football.

And I’m not just talking about the raw numbers which have been impressive to this point in the season. As a team, the Birds are tied for third in rushing yardage per game with the Denver Broncos and are averaging 143 yards per game.

While the old running back in me is not a huge fan of running back by committee, LaGarrette Blount, Wendell Smallwood and rookie Corey Clement are doing a good job of taking the Birds run game to the next level, especially with the absence of Darren Sproles, who is out for the season with leg and arm injuries.

Meanwhile, Smallwood and Clement contributed their fair share to the ground attack  with their ability to catch the football out of the backfield, block in the passing game, and by carrying the football inside the red zone.

Both Smallwood and Clement ran for 30 or more yards including one touchdown in the win over the Chargers.  Even quarterback Carson Wentz got in on the running game by keeping drives alive with his legs.

But the thing that was most impressive about the Eagles running game is that it kept the defense off the field. Against the Chargers, the Birds dominated the game in time of possession. They held the ball for 39:18 as compared to 20:42. That’s a nearly 2-1 advantage. The Eagles also did an outstanding job of keeping drives going on third down. They were 9-of-16 converting third downs.

“We’re staying on the field, and then out third-down conversion rate has been good,” Eagles head coach Doug Pederson said. “And we’ve been able to stay on the field. All that is part of time of possession.”

“And then, of course, the run game, being patient there. Yesterday was an example. We got a few more chunk-play runs, but at the same time it all factors into time of possession.”

More often than not, time of possession in football does not always translate into victories and it is not always indication of a team’s dominance. Against the Chargers, the Birds rushing attack managed to do something it hasn’t done in quite some time: Close the show.

After the Chargers cut the lead to two points with 6:44 left in the game, the Eagles running game muscled down the clock and kept the Chargers offense on the sideline for the remainder of the game. The Eagles  offense was their s defense in that game.

“The ability to close out close games ends up making the difference between playoffs or not and so the fact that doing in now is good,” Eagles center Jason Kelce said.

That’s true. Of course, the Eagles would like to score points to give them a cushion to where they don’t have to always close out the show with the running game. But if the Birds, who are currently in first place in the NFC East, can bottle up last Sunday’s effort to put the game away, they will be a tough team to beat.