Rolling Around In The Bubble 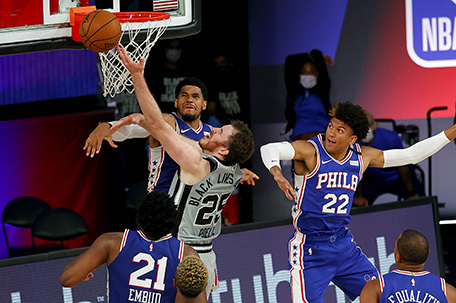 In two of the first three games of the Philadelphia 76ers experience at ESPN’s Wide World of Sports venue in Orlando, Sixers head coach Brett Brown was not happy with the way the team (41-27)  has played defense in the fourth quarter.

In their first two games, the Sixers allowed the Indiana Pacers (46) and the San Antonio (43) to score 40 points in the fourth quarter.  They escaped with a win over the Spurs but lost to the Pacers.

“When we choose to play defense on a more repetitive, regular basis, not the third period or not pay attention in the first half, when we get that disposition, that physicality, things are going to connect,” Brown said. “I feel like our communication is better and we are heading the right direction.

Against a pesky Washington Wizards (24-44) that’s 20 games below .500, the Sixers allowed just 24 points in the final stanza and held them to 42 percent shooting.  The 76ers still needed a dominant effort by Joel Embiid and a few key buckets from Shake Milton and Tobias Harris to come away with a 107-98 win.

Embiid, who has been the most consistent offensive weapon for the Sixers, scored 30 points and pulled down 11 rebounds despite being in foul trouble in the fourth quarter.  Brown said it was his best game so far.

“I think it’s the best place he has been since I started coaching him,” Brown said.

The bad news from the win over the Wizards is that Ben Simmons left the game in the third quarter with a knee injury. There’s no word on his condition. Near the end of the game, Simmons was in street clothes walking with a slight limp.

After the San Antonio Spurs had taken a four-point lead on a pull-up jumper by DeMar DeRozan with a 1:03 left, it looked like all the Brett Brown critics were about to jump out of the woodwork to question his fitness as a head coach after the Sixers had blown a double-digit lead for the second straight game.

But Sixers point guard Shake Milton saved the day for his team. With the 76ers trailing by two with 7.2 seconds, Milton drained a clutch a three-point buck that put the Sixers on top for good and enabled them to hang on to a 132-130 win over the Spurs at World Wide of Sports Arena in Orlando.

Milton’s big bucket not only gave the Sixers a much-needed win, but it gave him a small measure of vindication after a horrendous performance last Saturday against the Indiana Pacers. In that game, Milton went scoreless with three assists and one rebound in 19 minutes of play.

The only highlight for Milton in that game was the heated argument he had with Joel Embiid during a first-quarter timeout. But in the win over the Spurs, Milton asserted himself into the offense. He scored 16 points with three assists.

That is a textbook example of what a point guard is supposed to do, especially when the team is struggling on offense late in the game as the Sixers were on Monday. Milton managed to get open on that key possession because the Spurs defense converged to stop center Joel Embiid, who scored 27 points.

“(Milton) has been working really hard this season,” Embiid said. “He’s been showing up. That was a big shot. He gave us the win. I’m extremely happy for him.”

The Defense rests in the fourth quarter of first two games

While the Sixers were happy to escape with a win, there is still a troubling trend that this team needs to clean up during this final five-game stretch leading to the playoffs. The 76ers have a bad habit of losing double-digit leads in the fourth quarter and even worse, their defense is giving up too many points.

In the last two games (before Wednesday’s win over Washington), we haven’t been able to keep our man in front of us,” Embiid said.

In the loss to Indiana, the Sixers gave up 46 points in the fourth quarter, and in the win over San Antonio, the 76ers gave up 43 points in the final period. Philadelphia had a 14-point lead over a Spurs squad that should not be confused for an offensive juggernaut. The same thing can be said for the Indiana Pacers.

Of course, this is not new to this team. Before the COVID 19 brought the NBA to a screeching halt, the Sixers last game against the Golden State Warriors was a game in which they blew a fourth-quarter lead against an undermanned team that was missing Steph Curry and Klay Thompson.

That’s the reason why callers to my WURD radio show on Saturdays tell me that Brent Brown needs to be fired. Some fans feel that he hasn’t done a good job of instilling a killer instinct in this team, especially when it comes to the game’s home stretch.

“I think it stinks,” Brown said. “I think it’s not anything that we are or believe or talk about. We were lucky to win (Monday night). In two close periods, it was 46 and (against the Spurs).  That is not going to get anything of any importance done.”

Yeah, but what are you going to do about it? The general consensus around town is that this bubble season is a referendum on whether he comes back for next season.  Some would argue that anything less than the NBA Finals means that Brown’s time is up.

After Friday’s game against the Orlando Magic, the Sixers defense is going to be severely tested by the Portland Trailblazers, the Phoenix Suns, the Toronto Raptors and the Houston Rockets.  The 76ers are one game behind the Indiana Pacers, currently the fifth seed in the Eastern Conference.