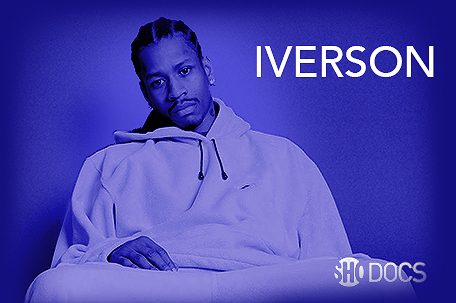 For the Chris Murray Report and Philadelphia Sunday Sun

There’s no question that Allen Iverson was an iconic figure in Philadelphia’s storied basketball history.  You can also argue that his star went beyond the basketball court. And that Iverson was a hero of a misunderstood generation of young people because he not only talked their talk, he walked their walk.

If anything, if there was an A- list of entertainers and athletes who are legends of the Hip-Hop generation, Iverson with his cornrows and tattoos would be on that list along with Tupac Shakur. To quote Dwayne Wade: “Iverson made Hip-Hop and basketball really come together. He was the bridge.”

The 90-minute documentary, Iverson, which recently premiered on ShowTime, is an intimate look into the incredible journey into the oft-times glorious and tumultuous basketball career of the former Sixers star.

I guess the first thing that jumps out at me and the one thing that makes this documentary worth watching is that it’s told mostly through the unfiltered words of Iverson himself and those who knew him and loved him from the time he was a youngster playing youth basketball and football until his brilliant and sometimes rocky ride to the NBA.

Iverson’s own reflections on his career were brutally honest about both the good and the bad. From his struggles, in the classroom as a high school student to the infamous “practice” press conference at the end of the 2002 season, Iverson doesn’t pull any punches in telling his own story.

The film takes a detailed, yet honest look into his childhood in an impoverished section of Newport News, Virginia. and through rare video footage and still photography you can see and hear the story of a kid who came up from nothing and then became an NBA superstar and a symbol to a generation of disaffected youth.

When you watch Iverson, you will find that it is a compelling confirmation of that old African saying that “it takes a village to raise a child.”

Another thing that struck me aboutthis documentary is that it was like just like Iverson himself in that if nothing else it was honest. At the beginning of the film, a group of Black kids playing pickup basketball outside of a Virginia recreation center was asked about him.

“He a good player on the court,” said one kid.

“He got a real bad attitude,” said another boy.

That scene reflected the enigma that Iverson was throughout his career. He was loved and loathed at the same time. The film captured tfie evolution of Iverson as both an athlete and a man and does a good job of chronicling the ups and downs of Iverson’s life.

From a sports perspective, viewers got a chance to see film of how great an athlete he was as a football player.   I have wondered about how good he would be had he pursued the sport. His mentor Gary “Mo” Moore said he was the “greatest quarterback” he ever saw play at the high school level.

Of course, you get to see the true genius of Iverson in the NBA from his legendary crossover move on Michael Jordan to leading the Sixers on in an improbable run to the 2001 NBA Finals.

The film also spends time talking about Iverson’s 1993 arrest and imprisonment for his alleged involvement in a bowling alley brawl. The takeaway that you get from watching this particular segment of the film is what a miscarriage of justice his arrest was at that time.

Among the interviewees in this profile of Iverson is former NBC News anchor Tom Brokaw, who interviewed him when he was in jail. Iverson credited that interview with Brokaw for leading to his eventual release from prison.

Of course, you’re going to go back to the infamous, “We talking ‘bout practice…” rant and you’re going to relive that from Iverson’s point of view, not just the soundbyte.

The only thing that I would have liked to have seen from this documentary is the perspectives from the local media that covered him on a regular basis. I think part of Iverson’s tumultuous basketball journey was his rocky relationship with the Philadelphia media..

All in all, the documentary, Iverson is a definitely an honest, must-see film.

Reflections on the career of NBA “Zen Master” Phil Jackson