Respect difference: Sam’s kiss is a defiant message against bigotry 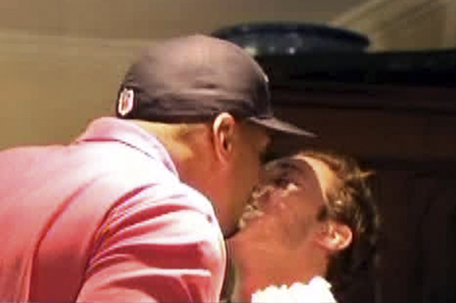 ABOVE PHOTO:  In this image taken from video, Missouri defensive end Michael Sam, left, gets a kiss from boyfriend Vito Cammisano at a draft party in San Diego, before he was selected in the seventh round, 249th overall, by the St. Louis Rams in the NFL draft Saturday, May 10, 2014. The Southeastern Conference defensive player of the year last season came out as gay in media interviews this year.  (AP Photo/ESPN)

In a television special on NBC in 1968, Harry Belafonte and white British pop singer Petula Clark performed an anti-war duet—“Path to Glory”.

During the course of the performance, Clark touched Belafonte’s arm.

A white account executive from Chrysler, the sponsor of the show, demanded that the segment be deleted from the special before it aired not only because it would offend viewers from the South, but because it offended the account executive’s racial sensibilities as well. He wanted it replaced with video that showed Belafonte and Clark performing the song, but standing apart.

But Clark and her husband, the executive producer of the show, refused to allow the sentiments of the Chrysler executive or Southern viewers to make them change the segment.

It was the first time a black man and a white woman touched one another on national television.

University of Missouri star defensive end Michael Sam was drafted by the St. Louis Rams in the seventh round and celebrated the moment, the moment of becoming the first openly gay player to be picked in the NFL Draft, by kissing his boyfriend, Vito Cammisano, on camera.

Social media, as it is wont to do, blew up shortly afterward. While many found it historic, there was a contingent of folks, most of them male, who couldn’t get past the fact Sam, the Southeastern Conference’s Defensive Player of the Year, was kissing a man on camera.

For some of us card-carrying heterosexuals, it was a bit over the top. The reactions I saw on Facebook, Twitter, and among the people at my favorite watering hole kept bringing a line from the Gil Scott-Heron classic “B” Movie to mind: 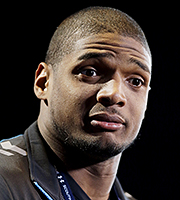 Witnessing people whine about their discomfort and display their prejudices with the pride they’d rather not see gays and lesbians express in regard to this situation made me truly understand why my gay brothers and sisters have been so fervently fighting for their right to express themselves.

American society has always had this “discomfort” with people who aren’t white, Anglo-Saxon Protestant heterosexuals. There’s this perception that you are only a true American if you’re willing to sacrifice your culture, your beliefs, and even your sexual orientation to appease the racism, sexism, and homophobia of the white men who run this society. Difference is seen as inferior in America and because it’s inferior, it must be stamped out.

Over the years, I have watched and covered the NFL Draft. When a young athlete hears his name being called, he kisses his mom and his wife or his girlfriend.  It’s a happy day for that young man.

But while we tend not to look twice when a young man engages in a public display of affection with his Mom or female Significant Other, the Double Standard reared its ugly head when Sam and Cammisano kissed.

The most common reaction I saw was “Why do we have to see that?!”, which was closely followed by “Why are gay people are trying to impose their lifestyle on us?!” and my personal favorite, “What do I say to my kids?!”

Let’s keep it real, here. You were watching the NFL Draft and this happened. That’s why you saw it. Secondly, unless something has changed over the last few days and I don’t know about it, there is no law on the books that makes you have to become a homosexual. Thus, no one is forcing you to do anything.

And lastly, you tell your kids the exact same thing that you tell them when they see a man and a woman kissing: That’s what two people do when they love each other. Unless you’re like most parents, then you cover both of your ears and go “la-la-la-la-la” to avoid the question.

What disappointed me the most is that African Americans, a group of people who are among the experts in how America handles those with whom it is uncomfortable, were the ones asking the questions above.

I was even more disappointed in the straight-up lack of empathy with our gay and lesbian neighbors.

If you need any evidence of just how uncomfortable this country still is with the presence of black people even after the Civil Rights Movement, go to Google, punch in “Barack Obama”, and catch the wave.

From being stopped by the cops stopping you for no reason, to not being able to get a cab even when dressed in a suit and tie, America shows African Americans just how uncomfortable it is with us on a daily basis.

Even when we do things to make the majority culture comfortable with us like making our kids cut their locs or straighten their hair, it doesn’t help.

That’s unacceptable to me. The idea that gay people, African Americans or anyone has to go out of their way to appease someone’s comfort and prejudice is just wrong.

For gays and lesbians, fear of violent retribution, losing your job, and being shunned by your family kept such simple things as holding your lover’s hand in public out of reach for decades. Heck, the whole reason for the Stonewall riots, the event that began the Lesbian, Gay, Bisexual and Transgendered Liberation Movement, was that gay and lesbian patrons were getting tired of being dragged out of the Stonewall Inn in Greenwich Village by New York City police for the simple act of dancing together.

But while the pre-Stonewall days are behind us in a way, the reaction to Sam’s Draft Day kiss shows that while we can tolerate two men dancing together in a dark nightclub, we still can’t handle them holding hands, kissing or any of the myriad public displays of affection that are going on between heterosexual couples right now as we speak.

From the moment he came out and forced NFL general managers to put “openly gay man” and “football player” in the same sentence, Michael Sam has been consistent in putting his happiness before society’s comfort.

And even though you may not like it, you have to respect it.