Requiem For A Slugger 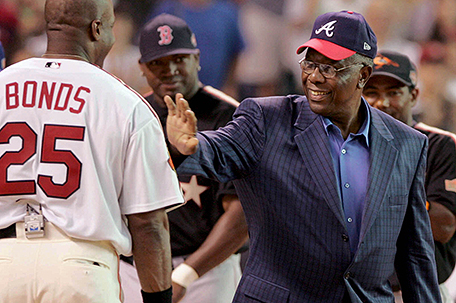 ABOVE PHOTO: Home run record holder Hank Aaron greets San Francisco Giants slugger Barry Bonds before the start of the All-Star Home Run Derby in Houston. Hank Aaron, who endured racist threats with stoic dignity during his pursuit of Babe Ruth’s home run record and gracefully left his mark as one of baseball’s greatest all-around players, died Friday. He was 86. The Atlanta Braves, Aaron’s longtime team, said he died peacefully in his sleep. No cause was given.(AP Photo/Eric Gay, File)

While Hank Aaron was feared as a hitter, people both inside and outside of Major League Baseball respected him as a man.

Over this past week, America has been treated to a number of stories about the greatness of Hank Aaron, the Hall of Fame slugger who died on January 22.

A number of these tributes have featured the iconic film of Aaron, then a member of the Atlanta Braves, hitting the homerun that would move him past Babe Ruth on the all-time home list, while others have focused on the racist vitriol he received as he made that climb.

Some of those glowing tributes focused on Aaron’s time in the Negro Leagues and how he was one of the last Negro League players in the majors.

But, my favorite story of Aaron’s heroics as a player was told by Pulitzer Prize winning columnist George Will in the Ken Burns documentary, “Baseball.” Will said a few pitchers from the Los Angeles Dodgers back in the 1960s were discussing how to pitch to some of the National League’s best hitters.

“Someone said, ‘Henry Aaron’ . … Dead silence in the Dodgers clubhouse,” Will said. “Finally, a voice piped up and said, ‘make sure no one’s on when he hits it out.’ ”

That was the ultimate respect and a fitting tribute for a man who was arguably one of the greatest and most-feared power hitters of all time.  On his way to hitting 755 home runs, Aaron hit 40-plus home runs more than once throughout a career that spanned over 23 years.

Aaron appeared in a record 24 All-Star games, won the National League home run title four times, and strangely enough, just one National MVP award.  He was the all-time homerun leader until 2007 and is still the all-time leader in runs batted in. He is also third all-time in hits behind Ty Cobb and Pete Rose.

On my radio show, “The Chris Murray Report,” a caller made the point that Aaron’s mark of 755 was more of a true record than Ruth because Aaron accomplished it when the game of baseball was truly integrated. During Ruth’s time, African American players were excluded from the game because of the “gentlemen’s agreement” among the owners to keep Black players out.

I would agree with that notion because Ruth never had to face a Satchell Paige or any of the other great Negro League pitchers. White major league pitchers never had to face a Josh Gibson or an Oscar Charleston.  I still wouldn’t take anything away from Ruth’s greatness as a hitter, but you do wonder how history would have turned out if Black players were allowed to play during that era with Ruth.

In the modern era, some of today’s baseball observers would argue that Barry Bonds moving past Aaron on the all-time home run list was tainted because of allegations that Bonds used performance enhancing drugs. I won’t delegitimize Bonds’s achievement because there were no rules against it at the time, which is Major League Baseball’s fault.

But Aaron had it tougher than both Bonds and Ruth because he managed to break the home run record while enduring the slings and arrows of racism and threats to his life as he got closer to it. As he was one run short of Ruth’s record at the end of the 1973 season, Aaron spent the winter reading hate mail from racist fans who didn’t want him to hit home run #716.

One letter read: “Dear Hank Aaron with all that fortune and fall that fame, you’re still a n—r just the same.”

But when the season started, the combination of intense media scrutiny and pieces of unsigned hate mail didn’t keep Aaron from hitting still hit the ball out of the park and conducting himself with dignity in the midst of all the madness that he had to endure in those times.

“I got threatening letters about kidnapping, viciously racist letters,” Aaron said in the Ken Burns documentary, “Baseball.”  “It was a terrible, terrible time for me.”

After Aaron’s career, he involved himself in various civil rights causes and became an outstanding ambassador for the game of baseball. I met him during the 2008 World Series after Phillies first baseman Ryan Howard won the Silver Slugger Award. He was very generous in his praise for Howard and was an advocate for him winning the National League MVP award that was eventually awarded to Albert Pujols.

While he is no longer the all-time home run leader by sheer numbers, Aaron will always be the “Home Run King” because he always managed to accomplish great things with dignity and grace while facing down the tyranny of racism and hatred.