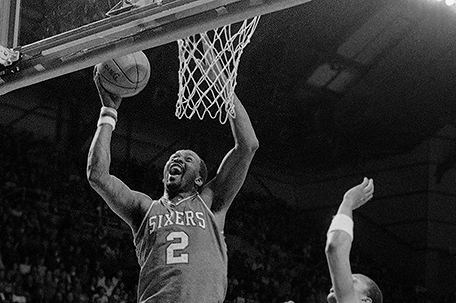 Hearing the song, “Fo, Fi, Fo,” by Philadelphia’s own Pieces of a Dream will probably choke me up a little bit now that former 76ers great Moses Malone is no longer with us. Malone, 60, died last Sunday from a heart ailment.

That’s because I remember that Sixers run to the NBA Championship in 1983 and I remember how Malone was the missing piece that helped the Sixers finally break the hold those pretty-boy Los Angeles Lakers had on the NBA title. I can still see Maurice Cheeks throwing down that last slam-dunk to put the cherry on top of a long-awaited NBA title.

And Malone, along with Julius Erving, Cheeks, Andrew Toney,  and Bobby Jones, was the man who made it happen.

Although I wasn’t a resident of Philly back in 1983, I chose the Sixers as my favorite team over the closest team hometown of Baltimore,  the Washington Bullets.

From the years, 1977 to 1982, I was just as frustrated as anyone living in the Delaware Valley at the inability of the Sixers to get past the Portland Trailblazers and Lakers. I was bummed out in 1981 when the 76ers blew a 3-1 lead to the Boston Celtics in the Eastern Conference finals and when they beat Malone and the Houston Rockets in the NBA Finals.

In 1980 and 1982, I turned off my TV in disgust rather than watch the Lakers hoist another one of their championship trophies. Yes, I was as big a Lakers and Celtics hater as anyone in North or West Philly.

The problem that the Sixers had in their various runs to the title is that the late Caldwell Jones and Darryl Dawkins, as much as I liked and cheered for those guys, were not physical enough to stop Kareem Abdul-Jabbar, and guys like Bob McAdoo and Jamaal Wilkes in the low-post.

Then the Sixers finally brought in the difference maker … the Chairman of the Boards.  “Moses! Moses! Moses!”  Say it with me, y’all.

Yes, the 6-foot-11 Malone was manna from heaven for a really good Sixers team that needed a dominant presence in the low post to compliment the skills of Dr. J, Cheeks, Jones, and Toney. In fact, Malone brought his own star with him. He won the NBA MVP award while he was with Houston.

If Toney was “the Boston Strangler,” Malone was the big destroyer, the aircraft carrier that sank the Lakers in the low post in the Sixers’ four-game sweep. He averaged 25.8 and 18 rebounds en route to becoming the MVP of the NBA Finals. L.A. had no answer for Malone.

During the 1982-1983 regular season, Malone averaged 24.5 points and 15.3 rebounds per game on his way to winning the NBA’s MVP Award.  During the playoffs, he averaged 26 points per game and 15 rebounds.

Malone was the epitome of what it means to be an MVP in any sport. He was the best player on the best team and he came through in every playoff game.  He led the Sixers to a magical season that garnered the city’s its last NBA title.

Coming out of Petersburg High School in Petersburg, Virgina in 1974, Malone was the top collegiate player in the country and signed a letter of intent to attend the University of Maryland. It was a team that already had players like former Sixers guard John Lucas, an All-American, former St. Joe’s Prep star Mo Howard and Brad Davis.

But instead of coming to Maryland, he became the first player to go into professional basketball straight out of high school when he signed with the Utah Stars of the old American Basketball Association.  He turned pro to help his family and needless to say he did just that in a 20-year career.

Maryland basketball fans to this day still long for the national championship he would have brought to College Park had he worn a Terrapins uniform.

But Sixers fans will always have the joy that Malone brought to the City of Brotherly Love during that magical 1983 season.

The Sixers need the fans’ support!