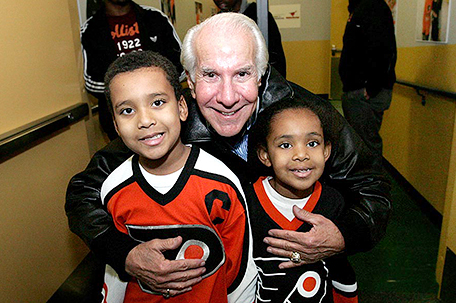 If there’s one thing that you could say about Ed Snider, it would be that he loved the sport of hockey so much that it was contagious.

When Snider founded and became the owner of the Philadelphia Flyers in 1967 as a new National Hockey League franchise, he transformed a city with no history or tradition in the sport into “Hockey Town”, thus creating one of the sport’s most rabid fan bases. During that same time span, the Flyers won back-to-back Stanley Cups (1974-1975) and became known as the “Broad Street Bullies.”

Snider died last week in his California home after a long battle with bladder cancer. He was 83.

Snider’s legacy as a Philadelphia sports team owner is right up there in the storied history of other luminaries including Philadelphia A’s owner Connie Mack.

As the owner of the Flyers and eventually the owner of the Spectrum and the Wells Fargo Center, Snider was constantly involved in the team’s day-to-day activities. The Flyers played for Lord Stanley’s Cup eight times and made it to the playoffs 38 times.

In the 1990s, Snider also acquired the Philadelphia 76ers. The best success the team had under his ownership was a run of playoff appearances, most notably the trip to the 2001 NBA Finals.

But Snider’s first love was hockey, and through the Ed Snider Youth Hockey Foundation, which he founded in 2005, he was able to spread that love to fans regardless of race or socioeconomic background. The Hockey Foundation provides hockey rinks and equipment to young people in Philadelphia and Camden.

Snider’s youth hockey foundation has given thousands of African-American and Latino kids the chance to not only be exposed to the game as a spectator sport, but also to learn and play hockey, a sport that’s often out of reach for those kids due to costly equipment and ice time.

In 1999, The Philadelphia Daily News named Snider the city’s greatest mover and shaker. He was inducted into the U.S Hockey Hall of Fame in 2011.

Snider’s shadow over Philadelphia’s sports world is as large and as profound as any of those cast by Mack or even such revered Flyers as Bobby Clarke. If there were a Mount Rushmore dedicated to Philadelphia sports, you would have to carve his image in stone.

That’s because Snider spread the gospel of hockey and it became a religion among Philadelphia sports fans. Those rough and tumble teams of the 1970s that won the Stanley Cups are so much an indelible part of hockey lore and tradition that fans sometimes mistake the Flyers for one of the original six teams that founded the NHL.

Snider’s greatest contribution is that he made the Flyers as big a city institution as cheese steaks, TastyKakes, Rita’s Water Ice, the Philadelphia Eagles, William Penn and the Liberty Bell. He was definitely a Philly icon.